The Anteeeks: From Kilmarnock.  Personnel -   Frank  Knapp (vocals); Billy  Gray (guitar); Jim  Condron  (bass); George  Butler  (drums); a bloke from from Cumbernauld (Malcolm McNally)  (keyboards).  Moved to London in 1965.  Released the R&B masterpiece I Don't Want You / Ball and Chain for Phillips in April 1966 - their only recording.   They supported The Animals at the Tiles club in London in 1966 and appeared on television - A Whole Scene Going in the same year accompanied by Gene Pitney.  George Butler played with Alex Harvey in Giant Moth in late '60s, resurfaced with Eggs Over Easy - the first London Pub-Rock band then later in the Lightning Raiders.  Last seen by us propping up the bar in the Princess Alex in Portobello Road (London) with ex-Pure Greed roadie Hughie Green and various ex-Sex Pistols and Roxy Music types.  But not last heard of - George tells us (11/04) that he is still around the Portobello Road, still playing and getting better at it too.  See you soon - oh, and - your round mate - ok?  Additional personnel info -  Jimmy Campbell. 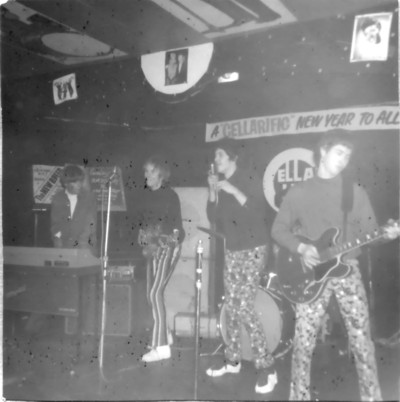 The Anteeeks playing at The Cellar in Kingston-on-Thames, Hogmanay 1965

More info and pics via Lenny Helsing - 'the Cumbernauld bloke was in fact Malcolm McNally who joined the group not long before they set off for London in late 1965. Their lone single came out in the spring of 1966, and by the summer Billy Gray had jumped ship to Bowie's The Buzz (Lower Third). Both George Butler and Jim Condon stayed on in London.  George played on Georgie Fame's 'Sunny' record too.'   Copyright on pics: Patricia Allen, sister of their manager at the time, Billy Smith  Cheers Patricia. 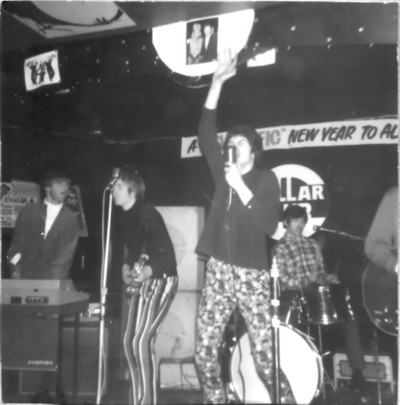 Yes Lenny, we do indeed dig those crazy cats' trews .