www.rockingscots.co.uk
(c) rockingscots.
Rockingscots is a website dedicated to Scottish beat groups of the '60s and  early '70s. Visit the Rockingscots homepage for more groups or to e-mail us.

This site takes the form of very brief biographies of Ayrshire bands and musicians of the 1960s and 1970s. We believe that those who trod the boards to entertain us then should not be forgotten.
We are keen to have more (in some cases any!) info on Ayrshire bands of any standard.

This section of Rockingscots is dedicated to Tom Jones (TJ the DJ) and also to John 'Toad' McNeilage. Both were old friends and sadly no longer with us. 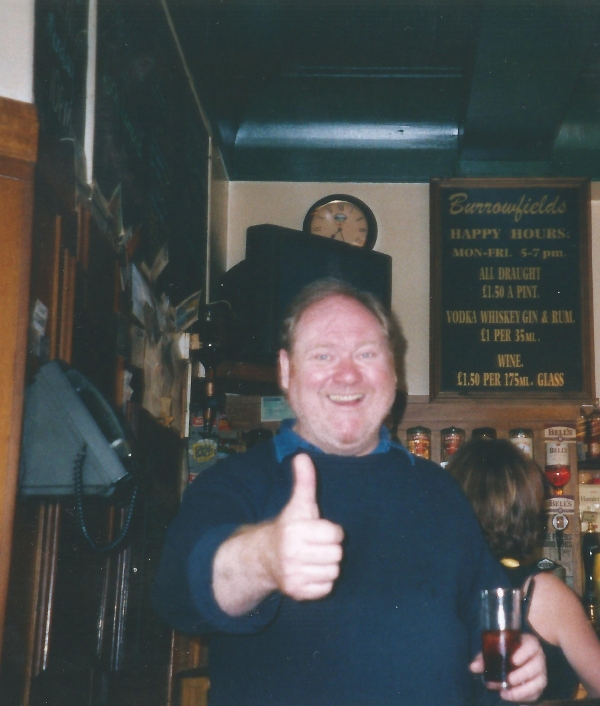 Tom Jones sadly passed away in April 2018 aged 68.
Tom was manager of the noted Ayrshire band Pure Greed and had an early foray into the music promotion business at Dalmellingtom Community Centre in 1969-1970
where he put on dances featuring Scotlands finest bands of the time such as the Poets, the Stoics and even Desmond Dekker the Jamaican SKA, Rock-Steady and Reggae star.
In 1974 Tom turned his hand to DJ-ing - at first working for others at the Red Lion in Prestwick and the Elms Court in Ayr
before establishing his own Powerhouse Rock Disco in the mid '70s - variously based at the Elms Court, the Station Hotel and the Sands Hotel (currently the Horizon)
before settling at the Pavilion (the Piv) in Ayr for 10 years or so.
While at the Pavilion, Tom  - now well known as -TJ the DJ - returned to music promotion  mainly at the Piv but elsewhere too.
Notably he brought Chuck Berry to the Magnum Centre in Irvine. 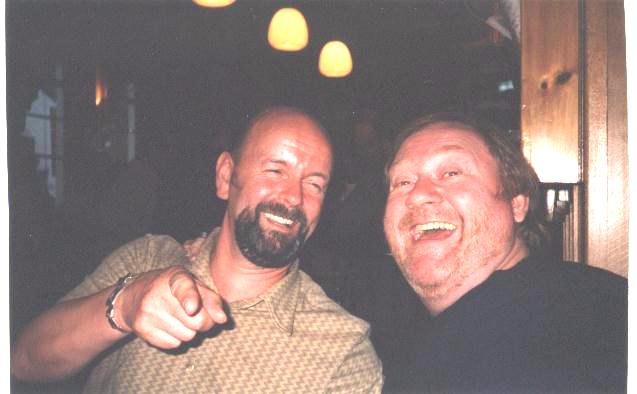 The number of bands that Tom brought to Ayr would take several pages to list but they covered all genres of popular music
e.g. Iron Maiden, UK Subs, Rory Gallagher, Steve Marriott, Ian Gillan, Frankie Miller and Fairport Convention.
In 1981 Tom began presenting his rock show on the newly opened local radio station- 'Westsound' in Ayr and did so successfully for many years.
In the mid 1980's Tom took over the bar/night-club Toledo Junction in the Nile Court, Ayr and it was renamed 'Jonesy's'.
He relinquished control of  Jonsey's in the mid-90s but continued to work as a DJ with his 'Mouldy Old Rock Show' at private functions and
various venues around Ayr until ill-health forced him to retire around 2012/13.
Tom was a very well known and well liked personality in Ayr - so much so that (as of 2018) there are 'Piv' tribute Facebook sites
and 'Piv' reunion nights arranged in the town.
He was perhaps the most influential person on the rock music scene in Ayr for two decades.
RIP Tam - a great music entrepreneur and a good friend to many. 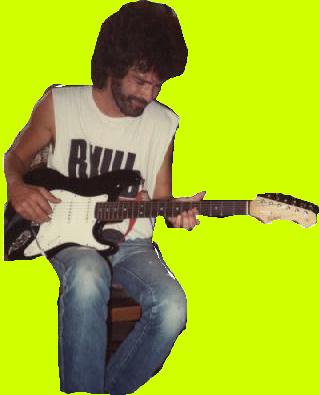 'Toad'  - guitar player with Lemon Cloud, Pure Greed, Uniform, Letsby Avenue et al. - Pic courtesy of 'Finiki' taken in Fulham in the early '80s.
Perhaps a less detailed career here - but liked and remembered by many all the same.

Now please click on a link to view a band of your choice or scroll on down. 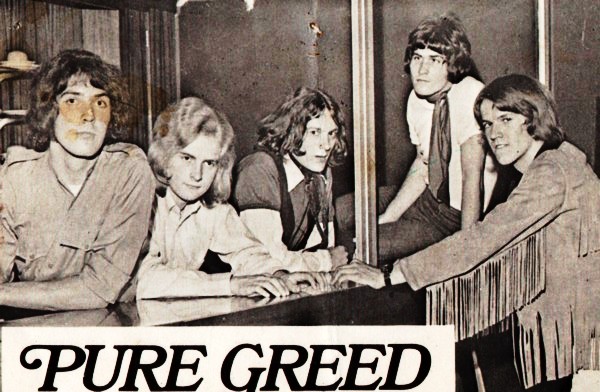 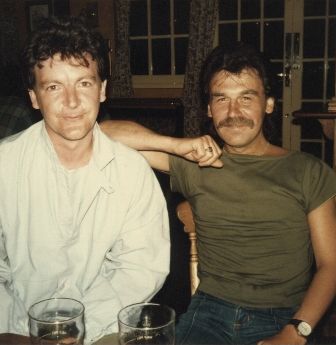 A pic from the mid 1980s of Tom McCartney (left) and Brian 'Blec' McKee, ex-Pure Greed roadie.
In the Crabtree near Fulham football ground.

Brian Low: A tribute from Colin Jamieson, one time drummer with the Corsairs and still playing in Germany - see above.
Brian Low was resident drummer at the Sunday band show at the Ayr Pavillion in the  early 60's. The show was compared by bandleader Andy Currie. The audience could send up requests for the band to play, written preferably, on the back of a five pound note as "auld Andy" would say. A popular request at the time was "let there be drums" from Sandy Nelson,a chart hit at the time. Brian did a great job of it, and it was different every time he played it. The band show also had guest bands, who would play for an hour or so. Some bands would play together with the resident band at the end of the show, this usually featured the solo instrumentalists including of course, the drummers. Brian ate them up every time. He also played with Tommy Trousdale for a short time then, he went to Germany with a blues band called the Blues System, featuring a great organist Jimmy Cosker and a local guitar hero at the time Jimmy Paterson.  Sadly, Brian passed away a few years ago but it should be acknowledged what a great talent he was.

Lex Dawn and the Rock Tunes: possibly from Dalmellington.  Lex on lead guitar, unknown drummer, tenor and baritone sax players, Margaret Wilcox - vocals;  no bass player.  Margaret was 16 or 17 and very like Brenda Lee. One night in the Pavilion around 1959 there was a good crowd in but Lex heads for the toilet after the end of a number.  The crowd get restless waiting and starts to heckle the band. Margaret picks up Lex's guitar  and they launch into a Chuck Berry number  with Margaret singing and playing lead guitar.  Lex comes back but the crowd want more of Margaret and there was a great laugh when she wouldn't give him his guitar back - but he was a great guy and took it well. Info from Robbie Gilmour. 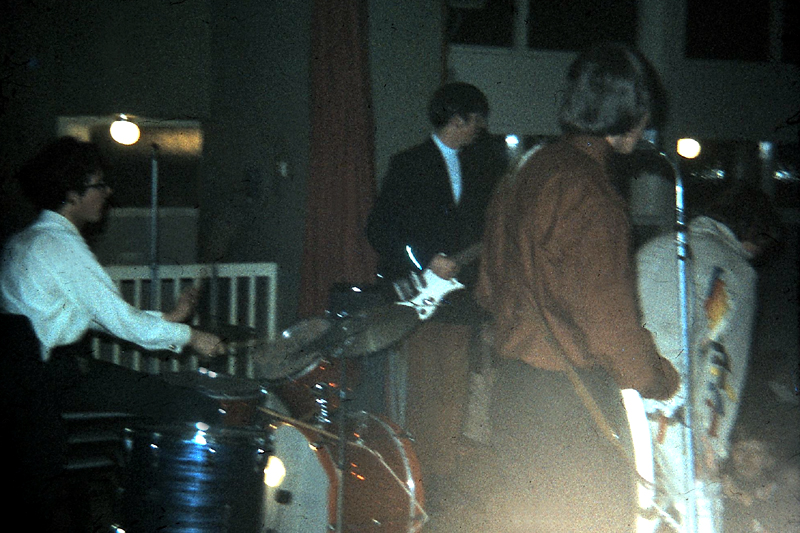 Big Dick and the Cowboys: From Mauchline and from a time before such a name acquired its present boastful connotations - or was it??