www.rockingscots.co.uk
Rockingscots is a website dedicated to Scottish beat groups and rock bands
from the '60s and early '70s.


HENRY WRIGHT - MEMBER OF THE MIDNIGHTERS, NEW RAIDERS,
BLUES COUNCIL, SOCK IT TO 'EM JB, THE POWER & THE FENCE.


All pics and narrative here from Henry Wright. 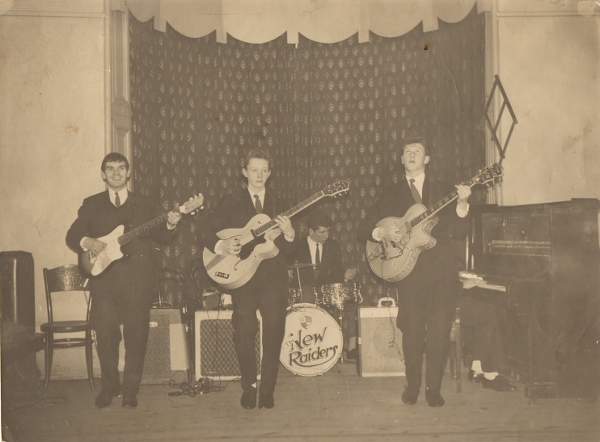 From left to right, Alec Scott, Stewart Dool, Henry Wright, Dave Watson and the legs on the end are John McGinnes 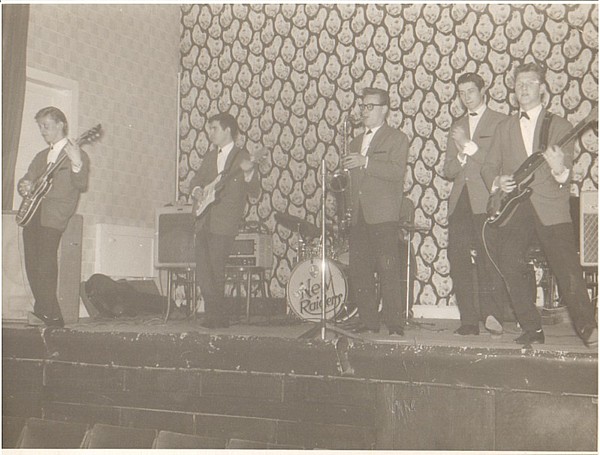 I always wanted to be a drummer since my Dad took me to see The Glen  Miller Story and then The Benny Goodman Story, so when I was 14yrs old I was lucky to meet George Hethrington who was the drummer in a band called the Midnighters. George was always a great singer and we liked the same music, Little Richard, Ray Charles, Gene Vincent, Chuck Berry etc which he could do very well so he alternated with the singer in the band as much as possible, preferring this to playing drums. George started to teach me the rudiments of drumming so when the singer didn't turn up one night I was drafted in. This band soon broke up and George formed a new band called the Raiders. 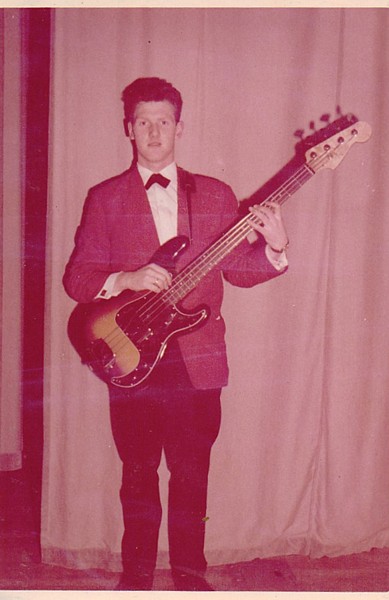 
"The Raiders" were the resident band in the 60's at the Flamingo Ballroom in Cardonald for two nights a week. The line up was myself Henry Wright drums, Dave Watson bass, a terrific guitarist called Stuart Dool and George on vocals.   Unfortunately George hated the direction that the band was going in and left to join an Irish Showband called the Monarchs who had a sax player/vocalist called Van Morrison. I'm sure they both learned a lot from each other. 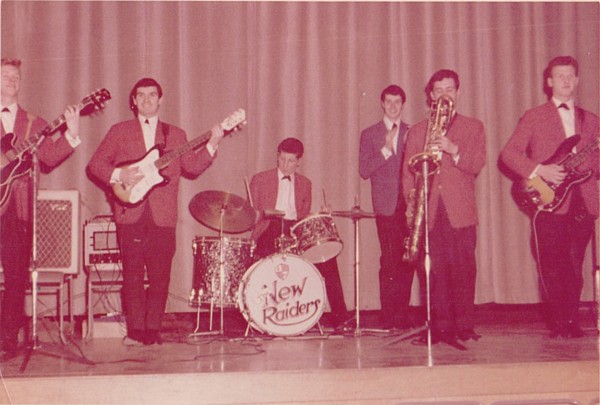 When George left we were lucky to get Fraser Calder a brilliant vocalist and Alex Scott on rythm guitar. We played one night of the week as a five piecel group and on the other night we augmented the band with additional musicians.  Over time, we had John McGinness on keyboards and sax players Johnny Elliott, George McWhirter, and Billy Lockhart (who later formed Sol Byron & the Impacts).  George Alexander sat in once - his real name being Alex Young brother of Angus of AC/DC fame. George went to join the band Grapefruit that had some success in the 60's .  We also had additional vocalists Bobby Coltart and Dawson Clark who had an amazing falsetto voice.  Our girl singer was Lulu who was also singing with the Bellrocks and the Gleneagles. The Raiders eventually broke up - Lulu stayed with the Gleneagles who changed their name to the Luvvers and the rest is history. 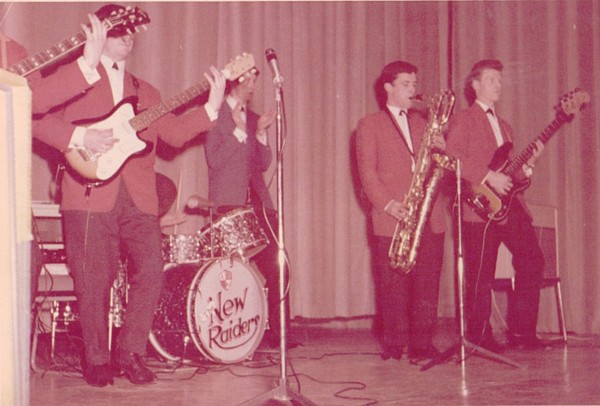 After the Raiders, Fraser and I played in a another group [no name given] for a very short time before we were asked to join a new band to be based on the current London scene and was to be managed by Alex Scott and Joe McCourtney who were looking to open a club in Glasgow. The band was the Blues Council which was to be the first mod band playing jazz tinged R&B, Ska & Blues and the club was the 'Allnighter' in West Nile Street. 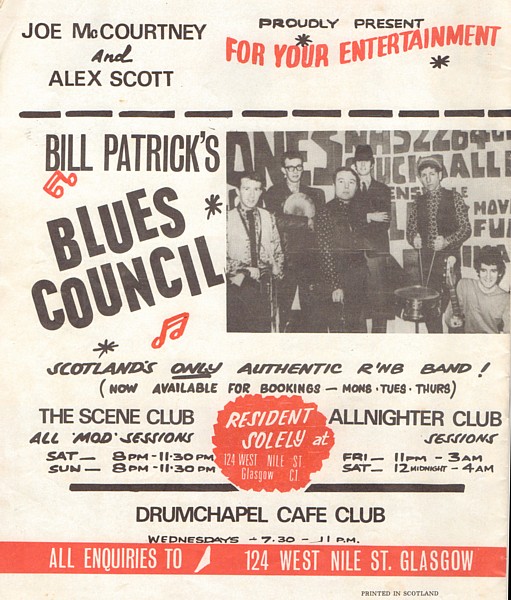 The line up was Fraser - vocals;  myself - drums; Bill Patrick - sax; Leslie Harvey - guitar; Jimmy Giffen - bass; John McGinnes - keyboards and George Carmichael also on sax for a short time.  We played Tuesday to Sunday 8.00 till 11.00 and 12.00 midnight to 4.00 Friday and Saturday, so you could say were got pretty tight in a short space of time. This was the best band by far in Scotland.  Onnie McIntyre and Alan Gorrie told me many years later that the Blues Council was a big influence when they set up the AWB. 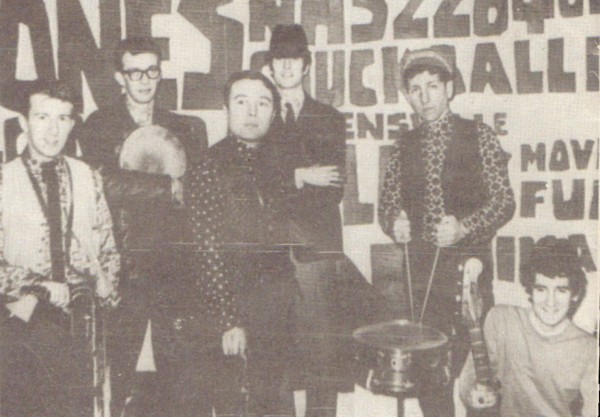 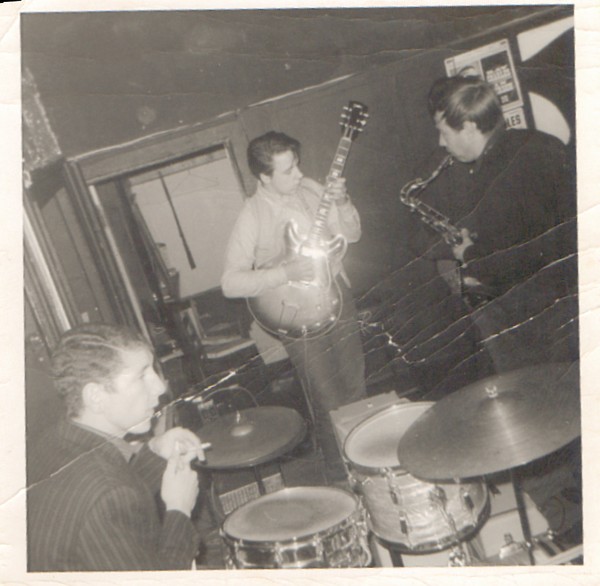 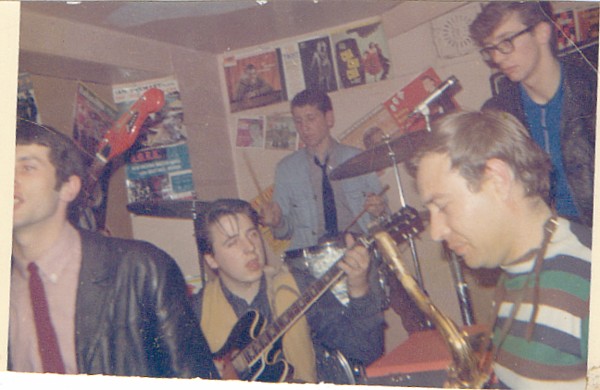 While with the Blues Council I was offered the chance to Join Lulu's Luvvers who were riding high with their first hit "Shout" and the chance was just too good to refuse so I left for London. I won't go into detail on this as the Luvvers are well  documented elsewhere.  The Blues Council had a great future but  came to a tragic end when Fraser and Jimmy were killed in a car crash. 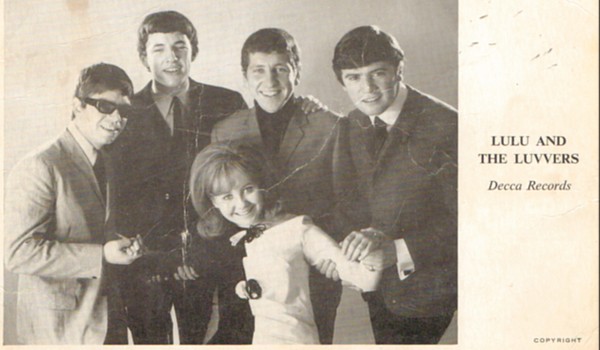 Top - Henry above Lulu
Below - Henry to left of Lulu 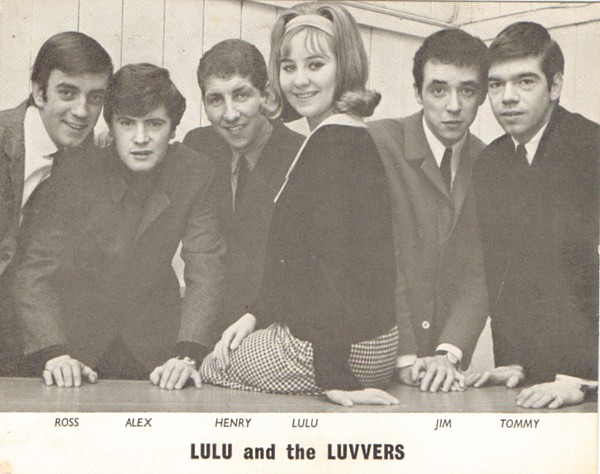 When I came back to Scotland after my time with Lulu, John McGinnes and I formed Sock "em JB which had Jimmy Dewer on bass, Billy Simpson on guitar, John on Hammond, Larry Quinn alto and another sax player who I believe was called Ronnie and of course Frankie Miller for a time. We played Burn's Cottage and opened Burn's Howff. We  played all over Scotland including around Dunfermline where the future Nazareth guys supported us. 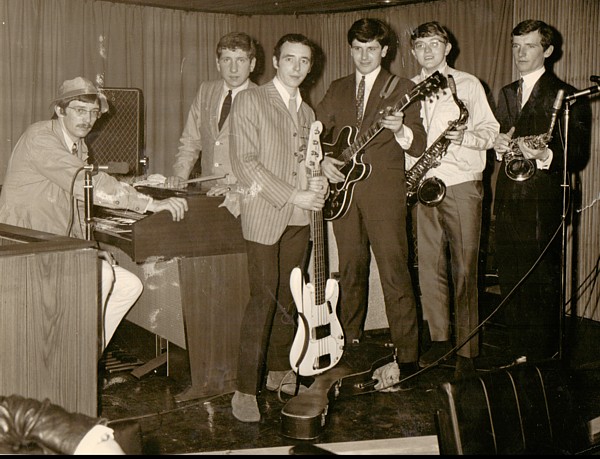 When this band broke up we formed The Power with John, Jimmy, myself, Leslie Harvie and his girlfriend Maggie Bell. Unfortunately  for me I got the offer of a job in sales that meant I had to go to London for six weeks training and it was only fair for them to find a replacement so I missed out when they went on to become Stone the Crows. 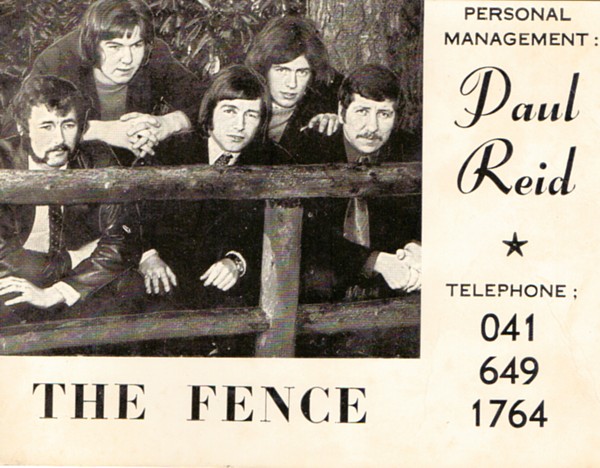 
My last band before I left Scotland to live in England was The Fence with Jimmy Corbally on Hammond, Larry Cunningham on bass, Rab McCauley on vocals, John McCulloch (guitar), cousin of Jimmy later of Stone the Crows and Wings, and myself on drums. We worked for the Music and Cabaret agency run by Ronnie Simpson and Alex Scott my old band mate from the Raiders   We played all over Scotland from Strathpeffer to Eyemouth.