We saw Jade when they played in support of  The Move at Ayr Ice Rink in Spring 1969.
At that time the band included Jim Diamond who went on to have very successful musical career - more on that 2nd line-up further below.

However, the band's previous incarnation came to our attention in 2021 and that ought to be recorded.
Information in this section mainly courtesy of  keyboard player Alan Smeaton.

'The first line up consisted of brothers David & Alan Seaton (vocals and keyboards respectively); Jim Lacey ( lead guitar); Chris Glen (bass) & Jimmy Murray  (drums).
'Jimmy Murray, myself and my older brother Davie were in the band 'Dream People' but when we heard the incredibly talented Jim Lacey play - he modelled himself on the style of Jimmy Doris of the 'Stoics' -
we jumped ship to form Jade with Jim and Chris in ‘68. We wanted a shot at the big time! Youthful dreams of pop stardom!
That led to a change of musical direction- much heavier and diverse influences like Pink Floyd, Led Zeppelin, Deep Purple, Jimi Hendrix,Elmer Gantry, Clear Light etc..
We also got very loud with Lead, Bass & Keyboards all belting out through individual 100 watt amps with 8 x 12” Marshall stacks and a similar P.A.
However, we had to compromise on some material to accommodate the agents who demanded a certain amount of popular and known material in the set to get work
though we always tried to do only numbers that we ourselves liked.'

All band members were from Glasgow. Chris Glen was from near Claskston; Alan, David and Jim Lacey were from Pollockshields as was their first manager, Kenny Brown.
Alan recalls, "As well as a residency at the Olympia in East Kilbride we supported several bands in the record charts of the time including Amen Corner, The Tremeloes, Love Affair, Johnny Johnson & the Bandwagon as well as the Bedrocks* and regularly, the fantastic Poets.  We played all over the West - Greenock, Kilmarnock, etc and had regular gigs in Edinburgh and the East too plus the usual venues in Glasgow like the Maryland, the Elizabethan, the Lindella, Sgt Peppers and the Locarno with its infamous revolving stage.  Sometimes we would have 3 gigs on the same night.
We also did the naval base at Faslane and the RAF base at Kinloss which were both very challenging as they expected 4 hours worth of material - needless to say there were a lot of repeats in the set."
Davie's wife Margaret recalls seeing posters and flyers from this period of Jade showing the band with long hair,
tailored stage gear by the renowned Arthur Black in St Enoch's Square and even hippie bells around necks!

Despite a solid booking list however, financial problems led to the band's equipment being repossessed and a change of management saw
Hugh McKenna, the original singer with the Stoics, take over.
Shortly afterwards, David and Alan left Jade in early '69, soon to be followed by Chris Glen who joined Tear Gas. 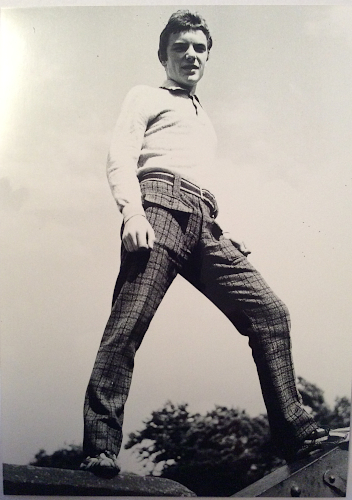 No band pics seem to be available but we do have this surviving one of Alan from a photo shoot in Maxwell Park, Pollockshields in 66/67
around the start of 'The Dream People'.  Pic courtesy of  Tom Bird.

How bands form, develop and move on is always of interest to Rockingscots. Alan recalls, "My older brother Davie and I were part of a very musical family.
Our mother had been a stage entertainer during the war and laterally sang classical music for women’s guilds to piano accompaniment.
She read music and encouraged us to perform.  In my case I had piano lessons but Davie had the voice and a natural talent for delivery.
Our uncle, owned Mozart Allen the music publishers and all our cousins played either piano, violin/fiddles or banjo.
The annual New Year parties were a time for everyone to perform their party piece on their chosen instrument or sing as appropriate.
I think performing was in our blood and these formative years no doubt set us up for the band to come."

"My brother Davie had a soulful style but could adapt to almost anything  - as boys we had always sung harmonies along to records of the time.
He had great timing and proved a superb front man with his confident and exuberant personality.
The Dream People started in ‘67 playing local gigs around Stamperland near Clarkston and the many dances in church halls as was the way in those days.
We predominantly played ‘pop’ including a lot of Tamla Motown which was almost a prerequisite to get bookings at that time.
Bands like the Four Tops, Temptations, Isley Brothers, Sam & Dave etc.were very influential and audiences expected their hits on the repertoire."

Info here mainly provided by by Willie McClymont the manager of Jade who had taken over from Hugh McKenna.
Willie confirms that the Smeaton brothers and Chris Glen had been replaced by vocalist Jim Diamond (vocals) and Pat Gaffney (bass) and yjat
the line-up of Jade that supported the Move and the Stoics at Ayr ice rink in early 1969 was accordingly:
Jim Diamond (vocals), Jimmy Murray (drums), Pat Gaffney on bass, Jim Lacey (white Fender Stratocaster guitar later redone in black by Willie).

The band used to use Sergeant Pepper's for rehearsing during the week and played there some Saturday nights too.
Their set consisted of heavy rock versions of soul songs like R Dean Taylor's "Gotta See Jane" and "Private Number" by William Bell along with
The Lemon pipers "Green Tambourine" and heavy stuff like Elmer Gantry's "Flames" and Fleur de Lys's "Liar".
They band moved to and played the clubs and colleges as support mainly to blues bands.

The gig at Ayr Ice Rink mentioned above was the Scottish end of a tour by The Move.
Other dates were  and the Sunday night was The Locarno in Sauchiehall Street. An excellent night.

What happened after and where are they now:  Jimmy Murray still thought to live in Glasgow.   Pat Gaffney last heard of living in  or .
Jim Lacey joined "The House of Lords," who in 1969/ 70 were a big attraction even in England .
They made an album for Famous Music under the name of "Hate" which was actually more than decent.
Jim Lacey played for "O'Hara's Playboys," - a big name showband of the day.
He then joined an English band called "The Alan Bown" with the late Robert Palmer on vocals.
After that he joined "The Andy Fraser Band" after the said Mr Fraser had left "Free".
Indeed he was a a talented guitarist but with the unfortunate knack of joining established bands a few months before they split up.

Jim Diamond  - who passed in 2015 - was only 15 when singing with Jade, went on to Gully Foyle before joining Alexis Korner.
Then he made an album with Carmine Appice of Vanilla Fudge and sang with Bandit.
He had a #3 with "I Won't Let You Down" fronting PhD but most famously he had a number one under his own name in 1985 with "I should have known better".
Jim latterly became half of The Blue Shoes.    Our thanks to Willie.

Final Rockingscots comment.  Its a small world right enough -
We remember Jim and his manager trying to have a quiet drink in the lounge bar of the Crabtree in Fulham one Saturday night at the height of his success.
Word soon went around as to who he was and the poor bloke had to leave to get away from pestering autograph hunters.
It was an honour to have him in our local all the same.  RIP Jim.