The Seven Sinners
See also a Robin Gilmour section below 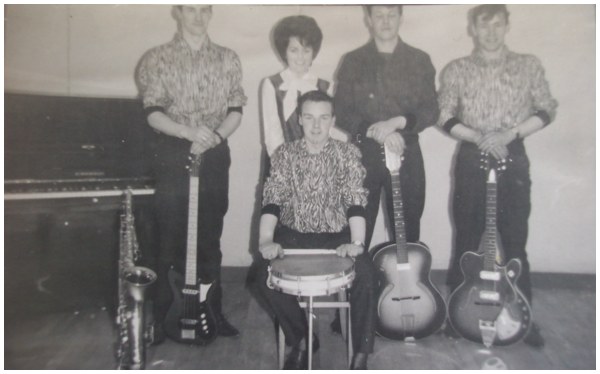 All info supplied by Robin Gilmour.

Origins of the Sinners
The Sinners sprang  from the Joe Duffy Band - one of the first rock bands in Scotland along with The Ricky Barnes All Stars.  The Joe Duffy line-up was Joe Duffy on piano with a mike stuck inside  it - he wrecked a few in the halls around Scotland; Davy McCroskie from Mossblown on lead guitar and Bill Smith on sax and clarinet from Dalmellington; drummer unknown at present; Wilma Telford vocals; her brother on bass and a young Tommy Truesdale, vocals. There was a  rhythm guitarist as well. McCroskie and Smith were 16 and 17 respectively -
all the rockers started at an early age! 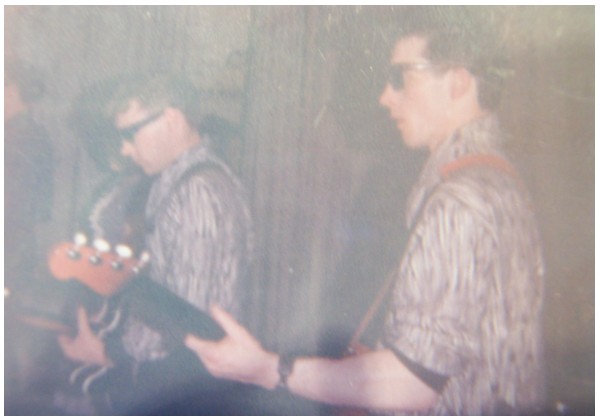 The Seven Sinners formed in 1961 and the first line up was: 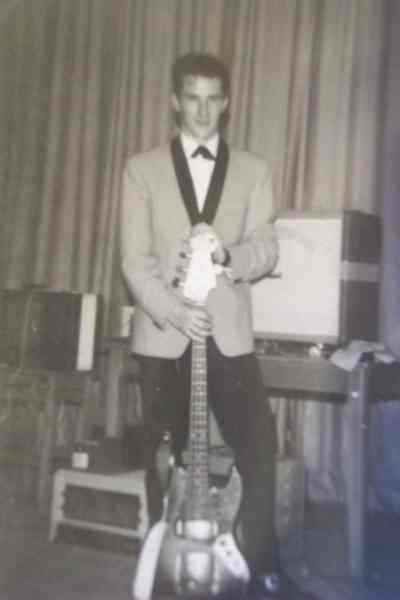 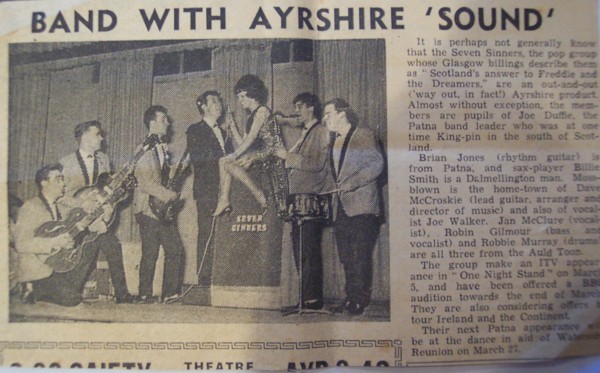 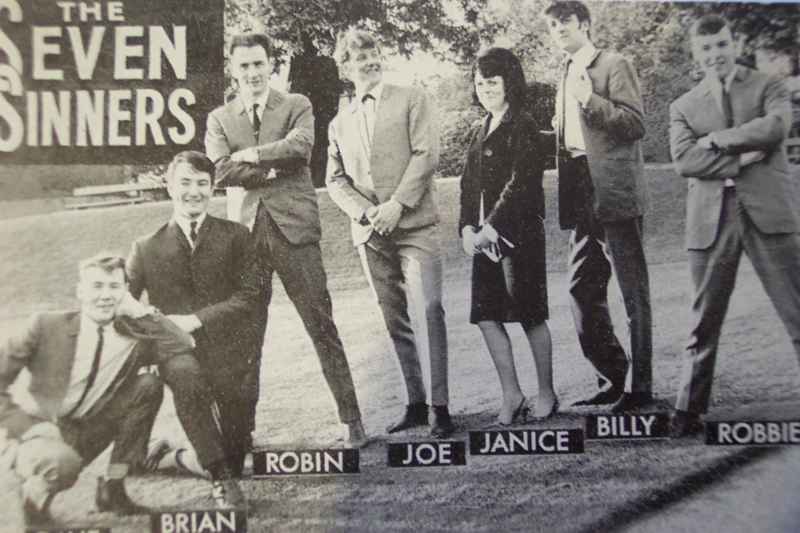 One of the highlights of the band's career was their appearance in March 1964 on an STV show called 'One Night Stand'.  The groups on the show were 'The Seven Sinners, 'The Golden Crusaders (Bathgate) and and English lot called the Zephers (cars again). It was compared by Pete Murray and each band did two numbers linked by Pete giving a short history on each band. 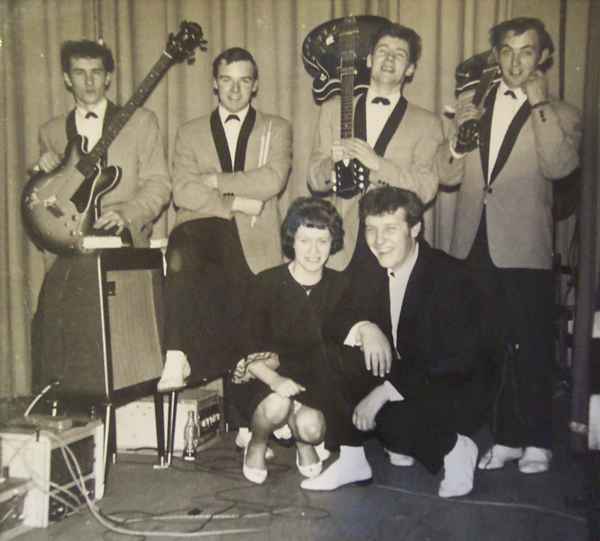 1964 - The band play at the world pipe band championships. Billed in the national news papers as 'Macbeat verses Macblaw'.
After playing their own numbers in the open air they were joined by the Ayr pipe band, whose pipe major was David McCroskie's dad,
for the final number - a feeling never to be forgotten according to Robin.

Look at the advert - the biggest pipe band championships in the world and how do you get a ticket - from a shop or an agency?
No, you get the bus to Holmston and knock on this bloke's door - and how much are they?  No idea, so you can't write and enclose a postal order (the old way of doing things).
You can't even phone to find out. Easy for TMcC though who lived round the corner.
Note the typo - repeated 'Ayr' instead of 'The'. 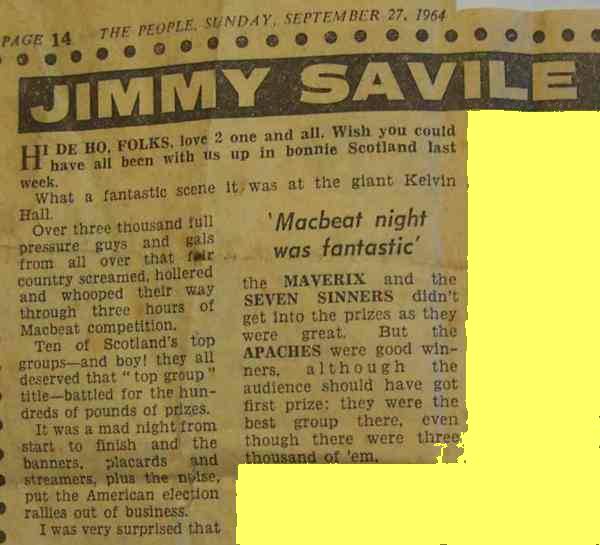 Jimmy Saville's report on the 'Daily Record's Macbeat' final in September 1964 where he was one of the judges.
Thank heavens we never came up with that as this website's name. 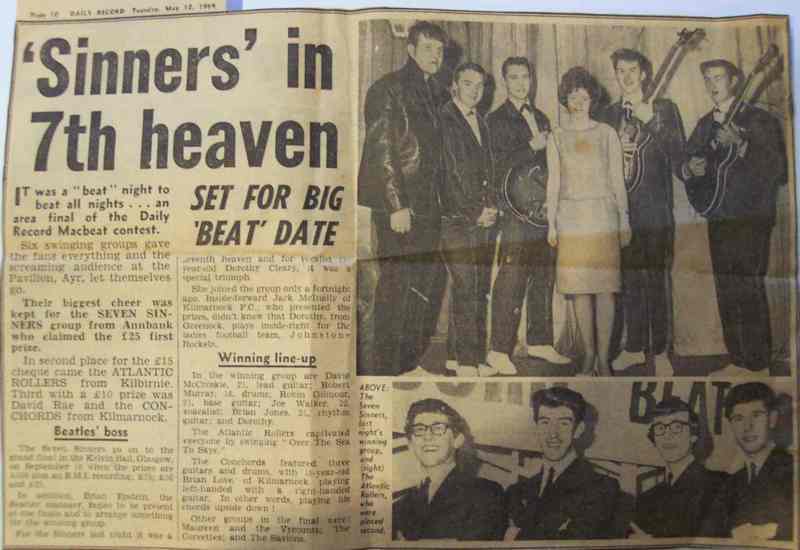 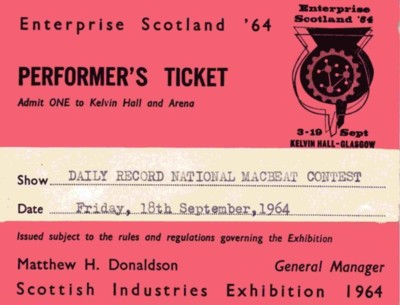 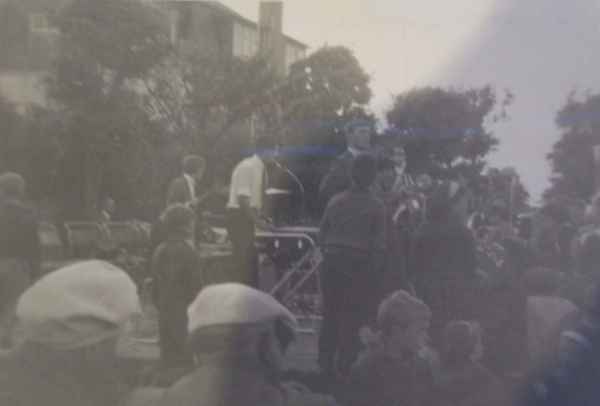 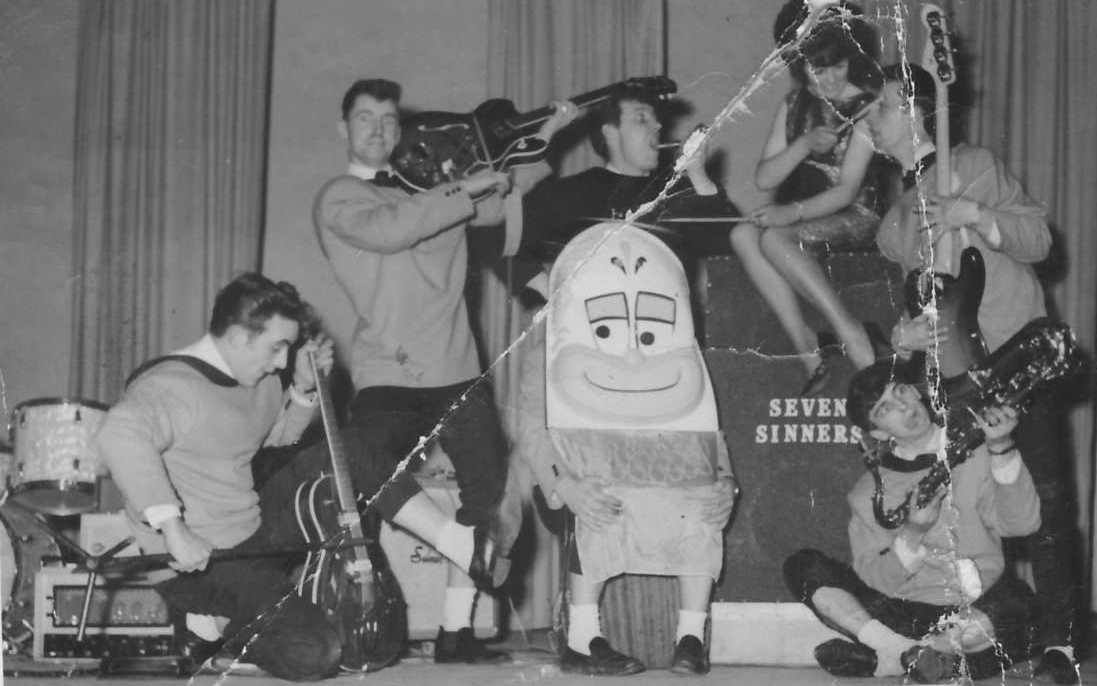 The band lark about for a publicity photo. 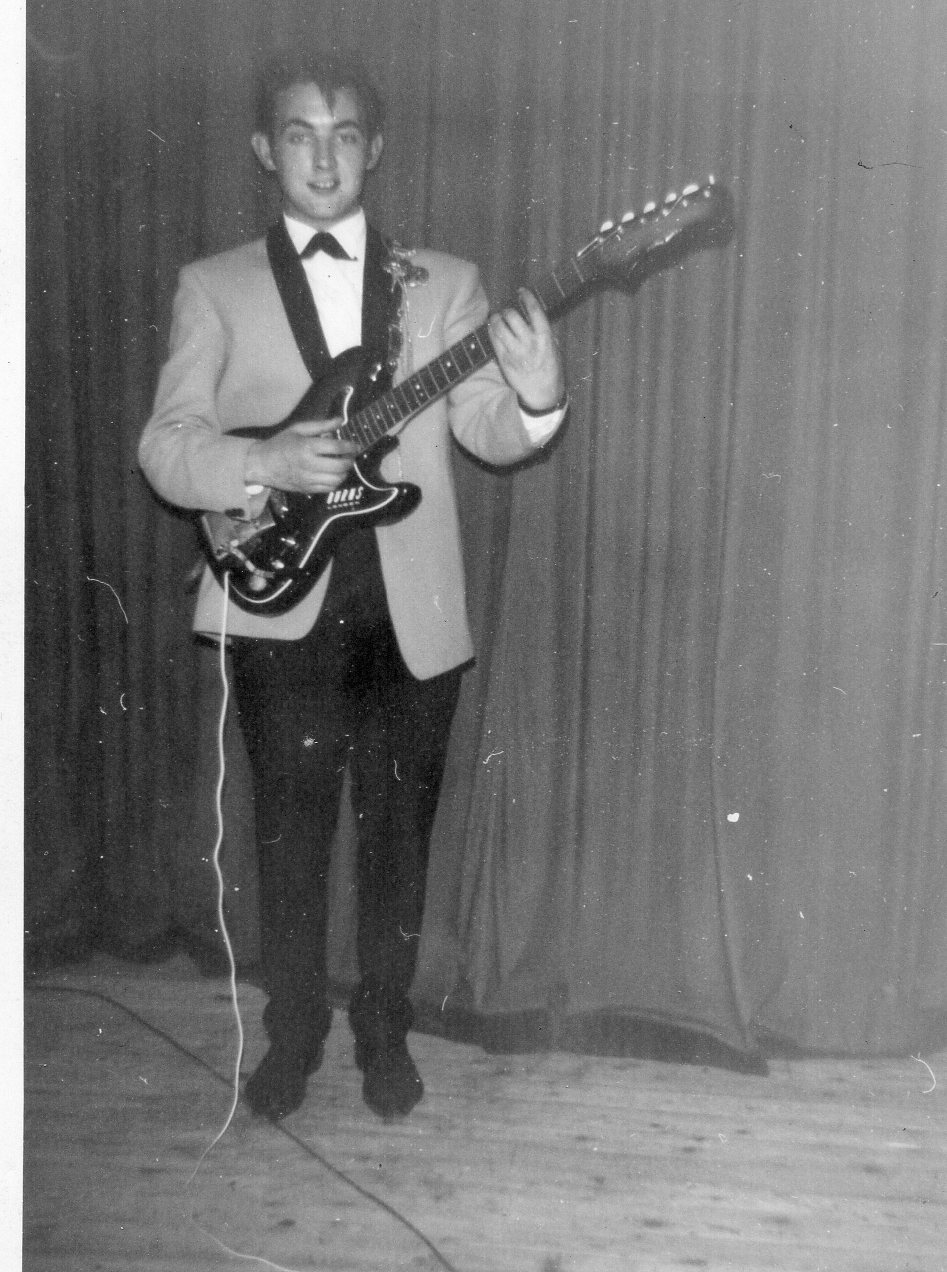 A very youthful looking Brian Jones with his Burns 6 string.
Brian later formed Midnight Express and played in other top Ayrshire bands in the '60s & '70s. 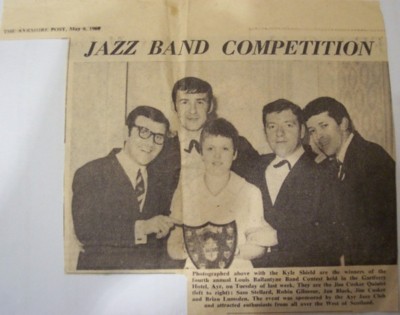 A further contribution from bass player Robin Gilmour about a jazzy one night stand.

A cutting form Ayrshire Post  9 May 1969 above.  The story goes - Robin Gilmour, Jimmy Cosker and Brian Lumsden were the resident band in Ayr Labour Club from 1966-1969 playing cabaret on  Friday & Sat nights plus Sunday afternoons and evenings with Robin on bass and lead vocals.  Anyway, Robin:  "We decide to go in for this jazz competition and team up for a one off with Sam Stellard and Jan Black the resident vocalists with the Bobby Jones ballroom big band. We had one  rehearsal then were the first band to go on stage - did the set then headed to the lounge bar as you do.  Two hours later the door opens and a voice  says - 'You jammy bastards.'   We went back on stage to play a couple a numbers and get presented with the shield.  What a load of *** we must have played but everyone was probably pissed by then.  Not all though because people still stop us in the street to say what a great night it was. Such is life."

Colin Jamieson - 'Great to see pics.of Sam Stellard & Jan. I left the Corsairs for a stint and played with the Bobbie Jones big band. Sam & Jan were the the singers. I think they eventually got married. Sam was a great singer withoot the ego and big heed tae go along wae it. Jimmy Cosker played in the Band Show days when I started, what a fantastic player. What a come down it must have been for him after playing with Brian Low on drums then, ending up with some plooky faced wee bastard wae half a drumkit and a bedside cabinet as a drum stool - no wonder Andy Currie senior wanted to sack me after the first night.  Jimmy went on to become musical director for the Ayr Gaeity.' 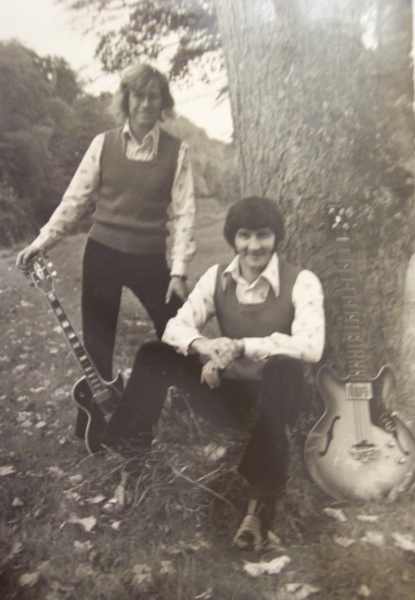 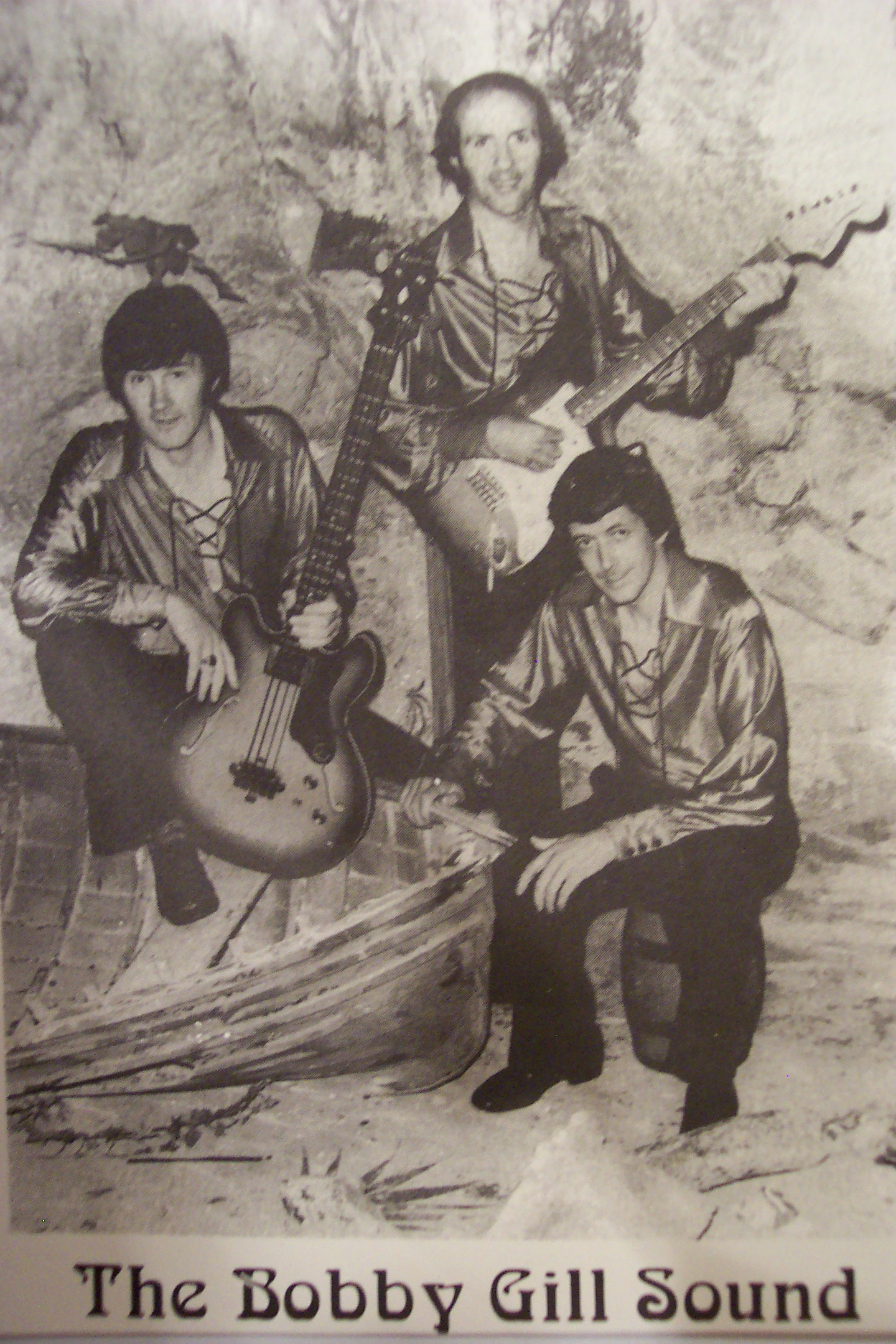 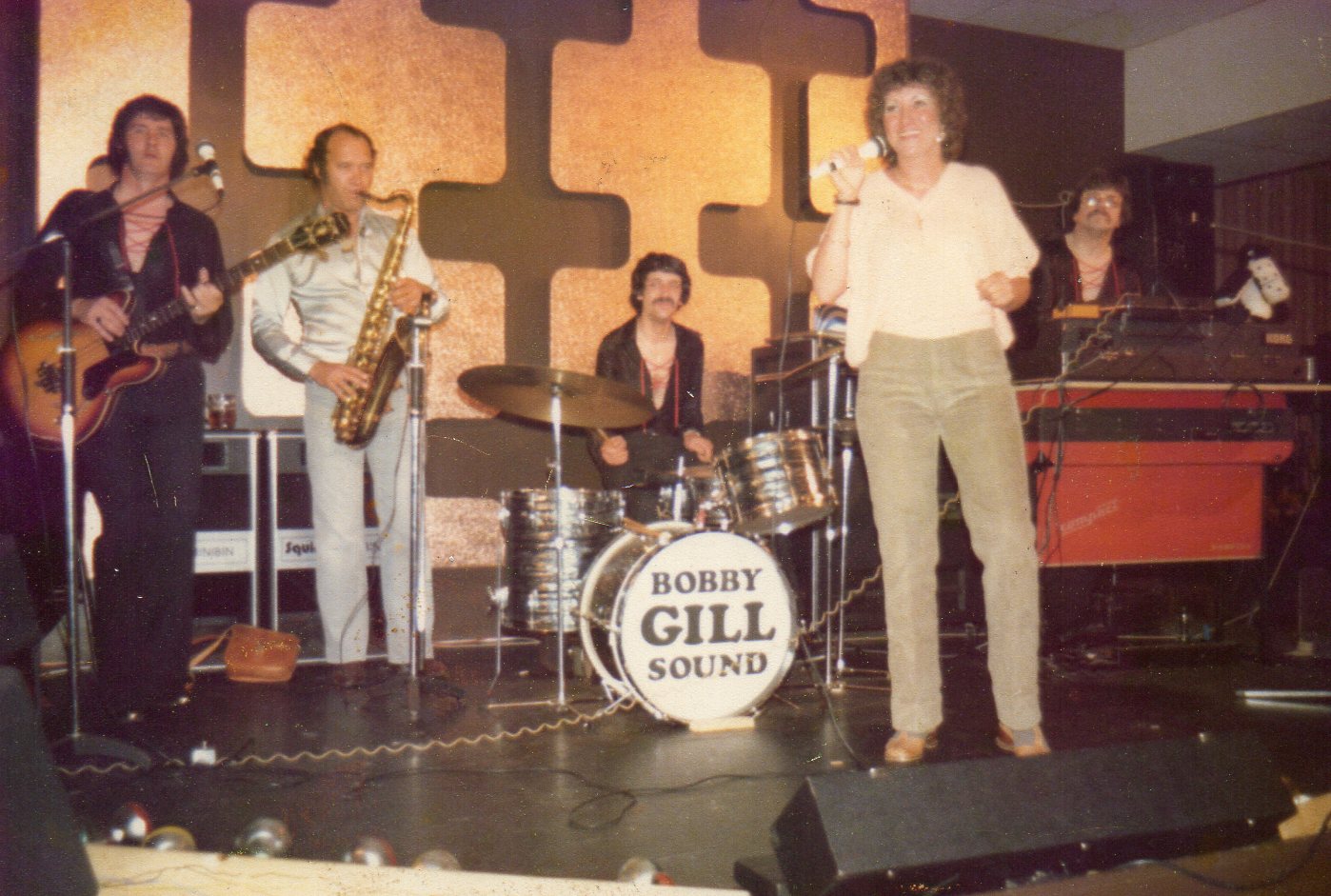 1979 - Continental Bar, Butlins. The Bobby Gill Sound members in black stage gear
Robin Gilmour (bass); Brian Lumsden (drums); and Jimmy Stewart from Kilmarnock (keys).
Also on stage jammin' with the boys - Kevin King (sax) & Della King  (vocals) both from London
on their night off  from playing in the ballroom with the Kevin King Big Band.
Jimmy & Kevin sadly no longer with us. 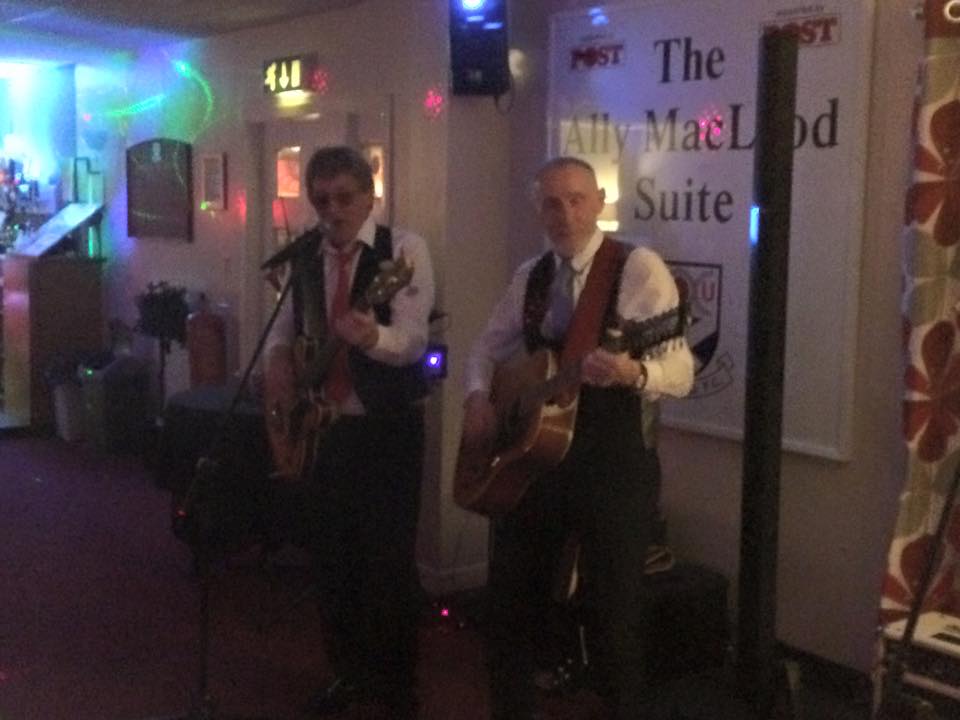 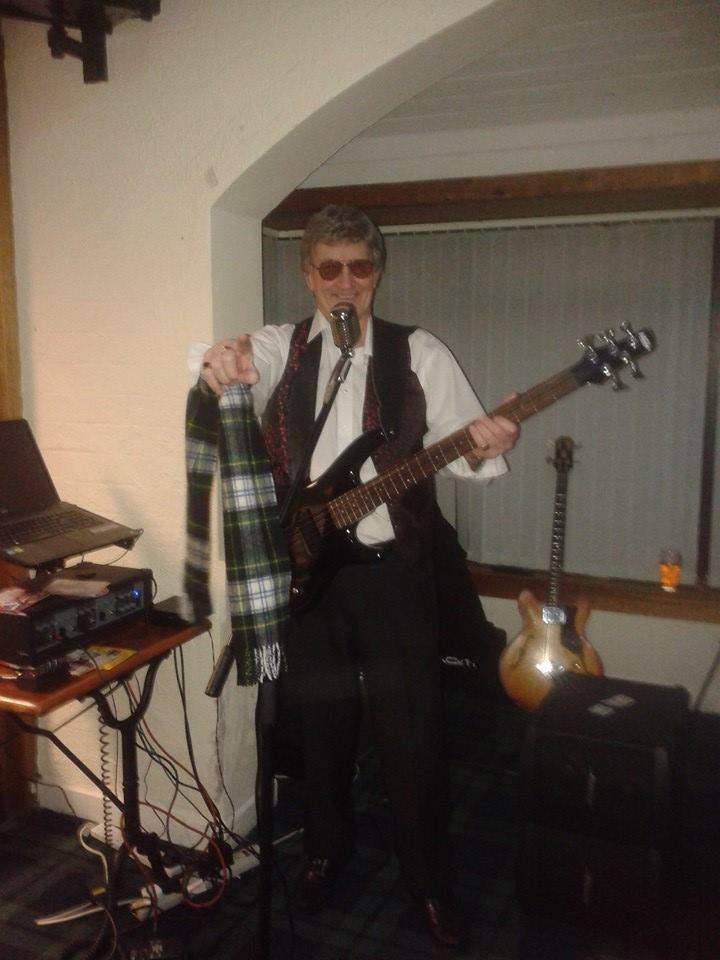