We have included this band not just because we'd put in anything that comes with a picture - though we would -  but because their experience must have been so typical of the many bands
working in Scotland and the north of England in the early-to mid sixties. All Info from Bernard Irvine.
From Clydebank, the band was formed in 1960 and after the usual order of the day, playing weddings, youth clubs etc to raise the money to buy even better equipment,
they managed to get on to the club scene in Glasgow.  They played 'The Maryland' and the Elizabethan for a promoter called Willie Cuthbertson.
They also played the Lindella during the Lulu years and got to know the guys in Marmalade through playing support for them on many occasions around Scotland.
The Boleros were the resident band in the 'Lennoxbank Hotel' in Balloch for a while and guested there on a regular basis. 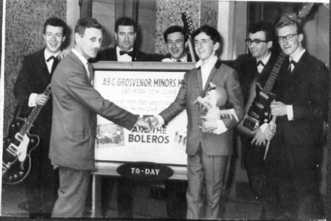 Above picture of the band taken for publicity in 1964 during a tour of  'Grosvenor Cinema's promoting an Elvis movie.
So they got to appear on the same bill as The King!!!
This one was the Byres Road Grosvenor. Back row left to right, Benny Irvine ( lead guitar ), Peter Watson (Manager),  John Dixon (rhythm guitar), Fred Forfar (bass guitar) front l-r Cinema Manager, Joe Johnston ( vocals) and Brian Gow ( drums).

Benny's guitar above is a Gretsch 6120 (Chet Atkins Tennesseean) and he nearly lost it that day.  The gear was all set on stage in front of the curtains,
and as the safety curtain went up so did the guitar.  The curtain could not be stopped in case the jolt made the guitar fall so the band and audience
had to watch it go all the way up and then all the way back down to safety.  No insurance of course! 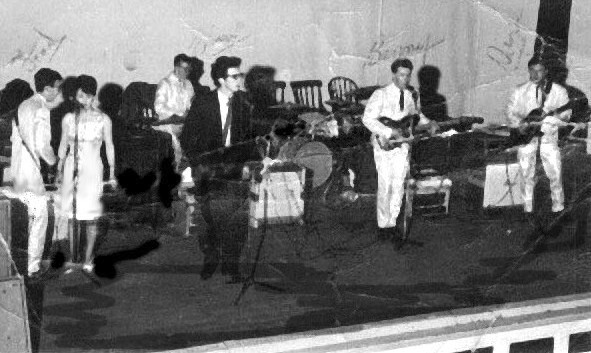 The pic above was taken in 1963 at a venue in Dundee during the band's lurex period!!!

Personnel : left to right.  Fred Forfar (Bass); Cathy Wright ( vocals); Brian Gow ( Drums);
Norrie McFarlane (one of the management team, tone deaf so must have been trying to impress some Lass);
Benny Irvine and extreme right John Dixon.  The guitars are all Burns Vistasonics. 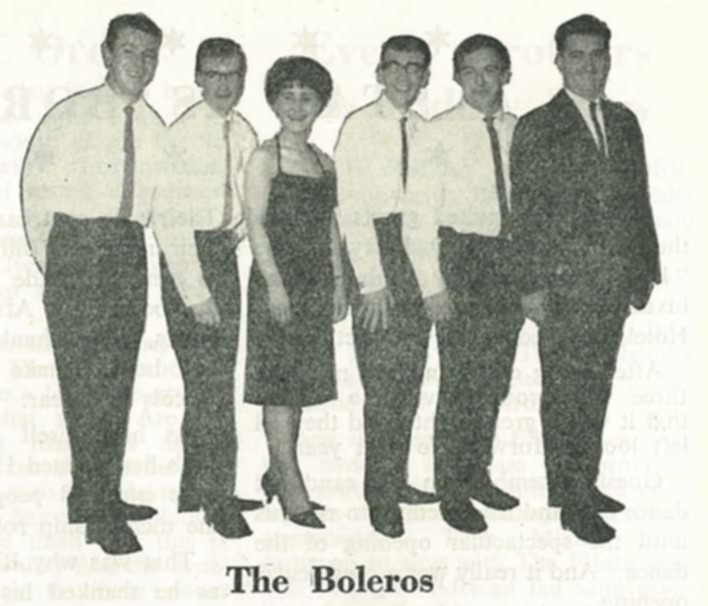 Junior Campbell also acted as impromptu guitar techie for the band once.  Supporting 'Tommy Scott and the Gaylords' once at the Lennoxbank Hotel,
Benny had a new Binson Ecorec echo unit he wanted to use but had no idea how to set it up.
On stage, the noise from the unit was terrible then suddenly the place was filled with this terrific sound and there's Junior Campbell, down on his knee's, adjusting the Ecorec.
The settings never got changed thereafter.

The band was originally called the 'Moonbeats' in 1959.
The line up then was John Johnson( sax and lead vocals) Tom McConnell (bass Guitar) John Dixon (rhythm guitar) and Bill Hepburn ( drums ).
Sadly the two John's and Tommy, are no longer with us.  In 1960 John Johnson left the band, and the hunt was on for a vocalist, a lass called Cathy Wright filled that position very well for a while
till she left to "pursue a normal life" .  Prior to Cathy leaving the band had taken on another vocalist,  Joe Johnson.
Tom McConnell was forced to leave through ill health, and Fred Forfar replaced him.  Bill Hepburn (drums) left and there was a period of  one drummer after another until Brian Gow was found.
John Dixon, was the next to leave, and was replaced by Tony Scullion, who as well as playing rhythm, took over as lead singer, at this point Joe Johnson left,
and the band then consisted of  the same four members until they broke up in 1967.

As to the numbers the band played, like everyone else they played 'Shadows' covers and whatever was popular.  From Jerry Lee - Chuck Berry - to - Everly Brothers , and with Cathy - Brenda Lee etc.  Venues : The Flamingo, somewhere along Paisley Rd West  maybe Cardonald, Barrowland, Dennison Palais, and the Marine Ballroom in Arbroath.  Add to that many town halls  as far apart as   Strathpeffer and Kirkcudbright with frequent visits to Stranraer.  Biggest exposure was a couple of support tours with Georgie Fame and the Blue Flames and Dave Berry around the north of England playing the North Pier at Blackpool, Morecambe, Leeds and Newcastle etc.   For the most of the last five years of the bands life it played almost exclusively at the Polaris sub base at Dunoon.

Where they are now :  Benny Irvine is retired and lives in Lancashire though still does a bit of  teaching guitar, more to keep the interest alive than any other reason.  Fred Forfar lives and works in South Africa, Tony Scullion and Cathy Wright still live in the Clydebank area.  As for the rest.....?
Cheers Benny.