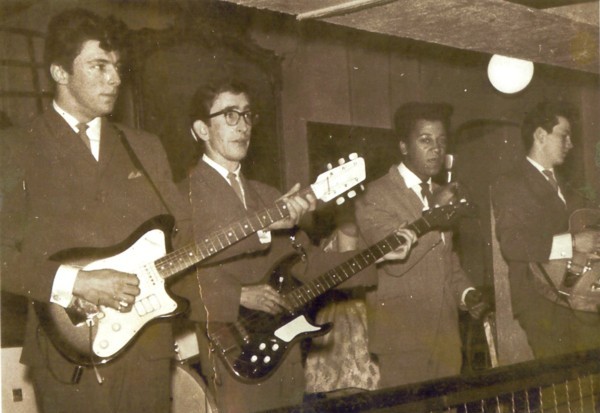 Pic of the band taken in Bonnyrigg Regal - early 1962.  This old cinema had a dance hall above it.
L. to R. Paddy Dixon rhythm, Ron Fraser bass, Roddy Reynolds vocals, Frank Connor
Others - out of shot.

Due to the influence of one Mike Egan, a classmate at school, I started playing guitar at the age of fourteen just as I was getting near to leaving school.  I don't think I put the guitar down for the next nine months! I was also fortunate to meet a man named Dick Gaughan - father of Dick Gaughan of the 'Boys of the Lough'), who taught me more about chords in that short period  than I have ever learned since.
I joined my first band aged fifteen in early 1959 - 'The Falcons', with Johnny Cambell, still one of the most listenable voices around,; Danny Lynch on drums, and Kenny Egerton (an Englishman), on rhythm guitar.  Kenny had a Watkins Westminster amp with two inputs - two guitar leads got soldered onto one jack plug and the mike went into in the other socket. No bass player - not many people played bass guitar until a bit later on. Our first gig was in a newly opened coffee bar venue, Bungy's in Edinburgh High Street run by the Waldman brothers.  For that we were paid ten shillings each a night! 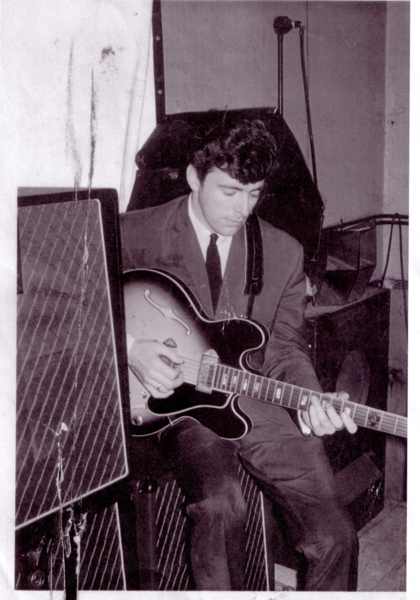 Paddy Dixon trying out a Gibson 330 belonging to Manfred Manns’ guitar player, Mike Huggs’ in St Boswells.
The band played support to a lot of such visiting ‘Stars’. Paddy had a favourite trick when he couldn’t remember the chords of a new number, he’d drop his plectrum and scrabble around on the stage until the offending passage of music had passed.

In a chip shop/restaurant with a downstairs room called the Hotplate in Dalry Road we did alternate Sunday evenings with the only other rock band I was aware of at the time, 'The Blackjacks' -  Lyn Devlin vocals, George Borthwick guitar  the two Colins on bass and drums, and Stuart Tosh on rhythm guitar.  They were a good band.  I also first met my long time friends Toto McNaughton and Tam White in those first few days at the Hotplate.

Shortly afterwards, bands such as 'The Crusaders', 'Butch and The Bandits', 'The Ricky Barnes All Stars', and from Falkirk 'The Saints' started appearing in halls and venues around Edinburgh, Musselburgh and Prestonpans.  The Saints had one of the best known guitarists at the time, Eric Liston.  Other excellent guitar players emerging around  that  time were Manny Charlton and Johnny Turnbull and also the three Aly's:  Dawson, Preston and Black.  Another excellent early band were the 'Kinsmen':  Aly Dawson guitar, Brian Henderson bass, Gus Rennie electric piano and Graham Ogilvie drums. Also - ‘Johnny Horne and the Hornets’ a seven piece with a sax and my old mate Wullie Mac on guitar with what seemed the first Watkins copycat in the world!

I was poached from the 'Falcons' by the Bathgate 'Crusaders' who eventually became the 'Golden Crusaders' to avoid confusion with the Edinburgh band.  However, in those days it was not very practical to live in Edinburgh and play with a band from Bathgate.  Anyway I was subsequently was asked to join the 'Edinburgh Crusaders' (actually from Prestonpans) by Tam Paton (later to become manager of the  Bay City Rollers)and we played all over Scotland for 'Drunken Duncan' McKinnon who ran Border Dances. That version of the Crusaders consisted of Tam on Keyboards/Vox Organ, Toto McNaughton  drums, Ron Fraser bass, Paddy Dixon rhythm, myself, Lead, and Vocals with Roddy Reynolds & Dot Walker (later replaced by Pat Fernie). We played all the chart hits plus R&B and instrumentals.

My day job was working for the Waldman brothers as a joiner and with one other guy, we made extensions to Bungy's so that bigger groups could play there.  Then they bought what was to become 'The Place' in Victoria Street from John Menzies the newsagents (one of their storage areas) and converted it into what was a 'Cavern' type venue.  Your contributor was right when he said the toilets used to stink, although I have to say that didn't happen until it had been open for a while. 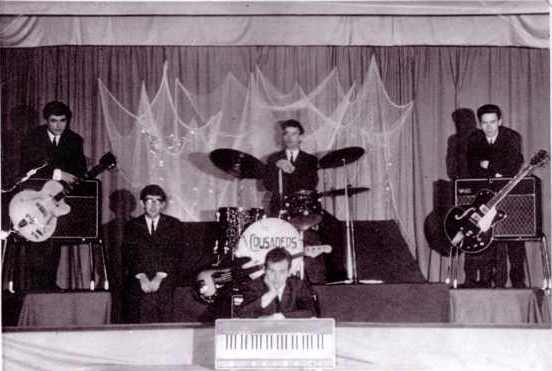 We were regularly playing at 'The Place', 'The Gamp Club', 'The Top Storey', and 'Bungy's 'as well as nearly all the other venues across Scotland often backing chart stars and bigger name Scottish bands.  We played the Maryland and Elizabethan Clubs in Glasgow for Willie Cuthbertson also did quite a few gigs at Lennoxbank and other places with ‘Dean Ford and the Gaylords’on the same bill.  There were a lot of good  and not so good bands, but I don't think there were any bad ones.

After about three years things were changing with 'The Crusaders', and I found myself back with the 'Golden Crusaders', again but this was only brief as I felt that they didn't really need me as the had an excellent guitar player in Billy Calhoun who had gone on to keyboards to accommodate me.  Back in Edinburgh I teamed up with two members of the R&B group 'The Embers' - Jimmy Cruikshanks and Peter Bottomley plus Jimmy Bain on bass and the excellent Allan Pratt on drums.  That was a short lived  band called 'Grant Hardy', a name gleaned from a whisky bottle and a passing removal van. 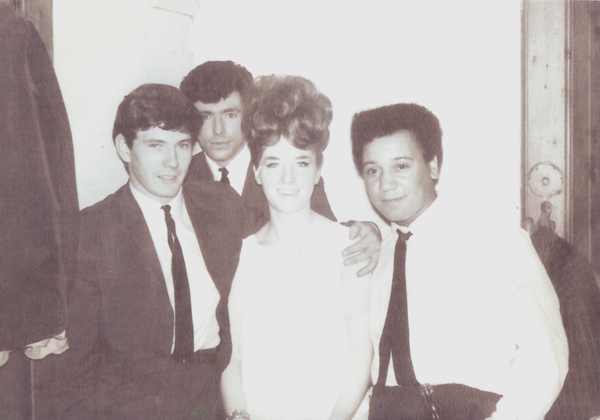 L. to R. Frank Connor (note that hairstyles were changing to beatle-ish cuts, Pat Dixon, Jeanette McKinley (Frank was was just keeping her warm) and Roddy Reynolds - still singing good style in Canada by all accounts!.

The following story may clear up any confusion about the origins of a well know face from around this time.  After 'Grant Hardy'  I found myself back with my old pal Toto when we reformed 'The Boston Dexters' under the clever name of  'The New Boston Dexters'.  The starting line-up was was Toto, myself, Smiggie on bass, (it's true) plus Gus Rennie on electric piano.  But we needed a singer, someone different if possible.  I had noticed the DJ in the Place  - he seemed to be totally uninhibited and really just lived for what he was playing. He would be up on his desk just going ape shit to all the soul stuff he was playing.  I went in one night and said, 'Can you sing?' and he answered rather sheepishly, 'I tried to sing with a band once but they kicked me out', 'Why ?' I asked.  'Because I was crap'  (actual words), he replied.  'I couldn't sing in time'.  I still thought it was worth a try.  He was right though - he couldn't count four bars of soap never mind bars of music.  However Toto and myself persevered for two weeks and got through our first gig in 'The Place'.  It still took quite a while for the new singer to get it together, but that was how Linnie Paterson started off singing in groups, and the rest with Linnie is history. He could be very volatile, I saw him go for three bouncers all at the same time one night in the 'Casablanca Club' in Rose Street, they were fending him off with a mike stand until it all cooled down.  When he was with us he was still working in the shipyard where he contracted the asbestosis that killed him.  I was very sad to hear about his passing. 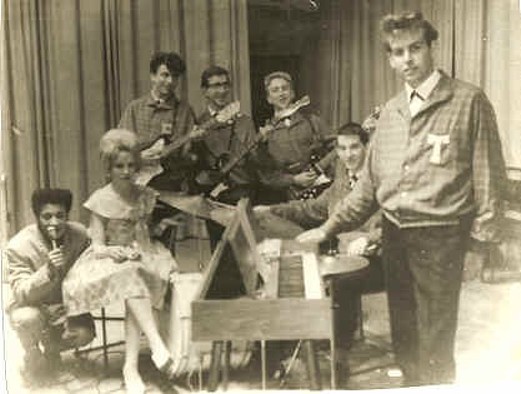 Group uniforms  (tartan check?) with US college 'lettermen' style initials on the front.
Dot Walker next to Roddy.

Eventually we went our different ways.  I was off playing with big bands on the Mecca circuit thanks to being recommended by Eric Liston for the Edinburgh Palais - and then on cruise ships. I was home for a bit and a new spate of bands playing heavier, more driving music were emerging. The first of these was the 'Jury' and then 'Writing On The Wall' which if my memory serves me, were made up from '3's a Crowd' and 'The Jury',  Jimmy Cruikshanks and Linnie Paterson on  vocals, Jimmy Hush on drums, Smiggy on lead guitar,but I can't remember who the bass and keyboard players were.  The first time I heard them it almost made my ears bleed, I had never heard a band that loud, but they were good.

My school-pal Mike Egan who was playing with 'Ricky Barnes' went on to join Ray McVay in the Orchid ballroom in Purley then to Ken Macintosh for a few years before ending up playing for Englebert Humperdink and Charles Aznavour plus doing a lot of session work in London.  I spent many years on and off playing the cruise ships etc.  I now live in Kent but  keep one foot in Scotland - a flat just off The Pleasance in Edinburgh.  I still have the Cadillac Green Country Club Gretch that I bought new in 1962 (it still sound good) as well as a barrage of others, Gibsons, Fenders etc.   I would love to have an email from any of the guys from those early days. 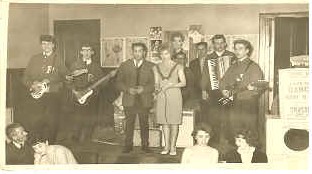 The late fifties and early sixties was a great time to be in a Rock&Roll Band in Scotland. Lots of great talent!  We { The Crusaders }would spend hours listening to the latest hits on Radio Luxembourg. We also spent lots of time at the music shops buying sheet music, seeing what was new in equipment and instruments, and listening in booths to the “B” sides of favourite hits. If we liked both sides, we would buy the record.   We often met up with other bands at the shops. We’d catch up on who was who, and get all the latest news. 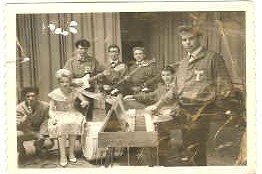 Companion shot to the 'uniform' one above.

The Crusaders wore normal clothing on stage at first - until we saw “The Quigley Brothers” an Irish band that played the Scottish circuit. They were dressed in coloured suits.  Tam Paton, our band leader, was very impressed and marched our boys down to a tailor shop in Edinburgh.  They got red suits except Roddy who got a purple one.  I then wore a purple dress. I sang songs by Connie Francis, Petula Clark, Brenda lee, Dusty Springfield and Helen Shapiro. My duets with Roddy included Everly Brothers numbers  and most groups who were in the top 20 at the time. 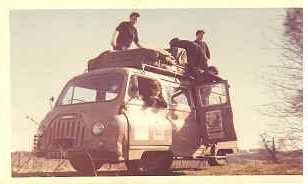 The Crusaders on the road - to or from who knows where?

My favourite thing to do when I come home to Scotland ( after seeing my immediate family of course!) is to gather at Tam’s place with former band members. We get as many of us together as possible and friends and family from other bands as well. We play music and sing, and reminisce about the good old days!

Many thanks to Frank & Dot for the text & pics.