Rockingscots is a website dedicated to Scottish beat groups and rockbands of the '60s and '70s.
Visit the Rockingscots homepage for more groups or to e-mail us. 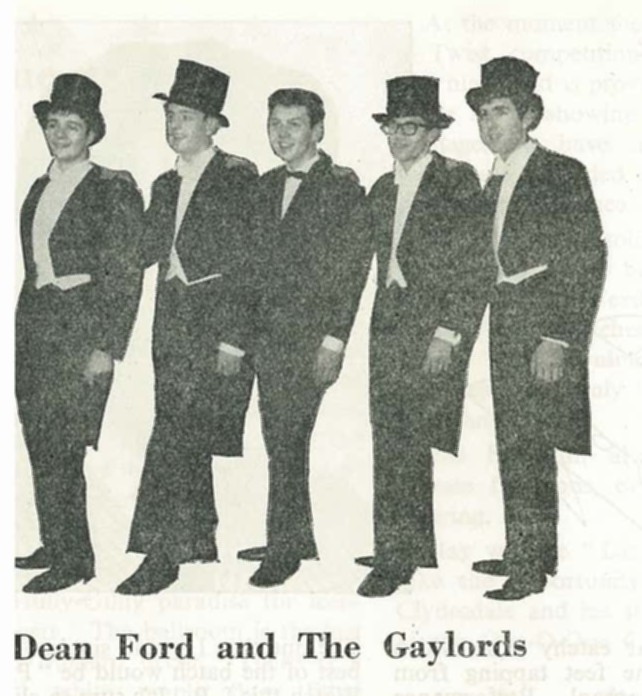 Not Lord Snooty and pals as you may have thought 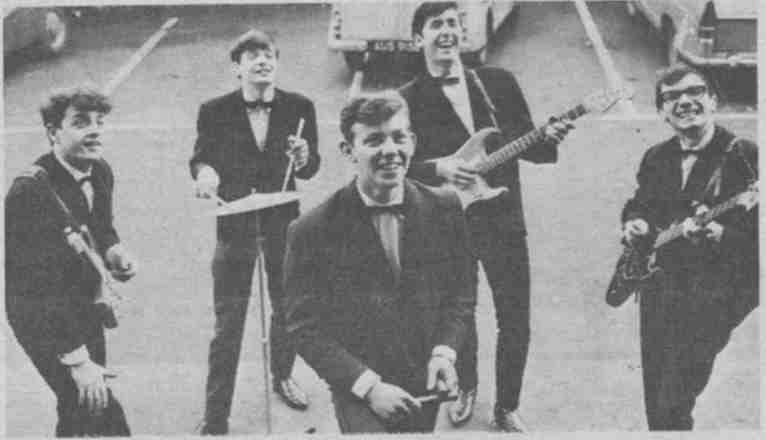 A cracking early picture of the band from an NME article that can be viewed on Marms pics.
Thanks to Piotr Symanski of Poland for digging this one out for us. 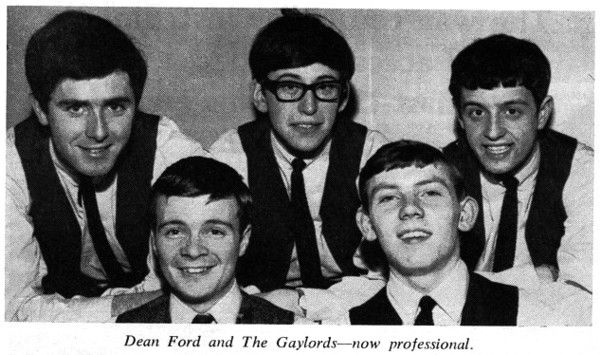 The band started life in the early 1960s as Dean Ford and the Gaylords, the band were from the Springburn (Record Collector (RC No. 186) or Shettleston (RC126) or Springboig (our man on the spot) areas of Glasgow. Then again, Thomas 'Nippy' McAleese ( stage name Dean Ford AKA 'Wee Dan') hails from Coatbridge according to a 1999 Sunday Mail (Scotland) article. Here is an early shot of the band from a Beat Instrumental of 1965 courtesy of Peter Hull from from East Anglia who also supplied scans of a couple of the Gaylords singles - see the Discography link. button. We've actually got them now thanks to box set re-releases.  The pic shows top l-r: Pat Fairlie (guitar/6 string bass), Graham Knight (bass), William 'Junior' Campbell (lead guitar).
Bottom l-r: Raymond Duffy (drums) and Dean Ford (vocals). Knight had earlier replaced one Bill Irving.

The band moved to London around 1966 and Mr Duffy quit to be replaced by Alan Whitehead - a former postie from Orpington. Duffy guests on the Poets 'Wooden Spoon' and later joined Mathews Southern Comfort and Gallagher and Lyle. He also gets a huge name-check on Junior Campbell's solo album - see the CD/LP review page. The band shot below shows Whitehead in the centre. The band now changed their name to Marmalade - the manager's idea - so hence the Robertson's jam Golly trademark on the bass drum. This pic is from the Castle CD: the Marmalade Collection from 1998.  They were referred to as the 'Scottish Tremeloes' as a sort of put down back in the day but we'd say the following.  Nothing wrong with the Tremeloes and both bands made happy records in a pop vein in the late '60s that are all still hugely enjoyable today. 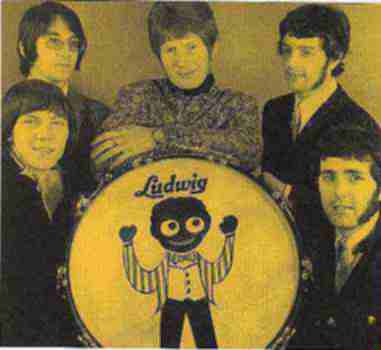 Marmalade's Decca material can be described as 'more mature' than the early pop hits. Listen and decide for yourself. Lots of harmonies and poignant lyrics.After 'Reflections', their biggest hit, a follow up album and another couple of singles, Junior left to take up a place at the Royal College of Music and was replaced by the talented songwriter Hugh Nicholson from the Poets - see our webpage on them.  Alan Whitehead was sacked at the end of 1970 at the instigation of Nicholson who wanted a more 'rock' drummer and got in his mate Douglas 'Dougie' Henderson from his former band. Ford was quoted at the time as saying Whitehead could be recognised around town by the big footprint on his bum. Not very nice.
But in the notes to 2000's double CD covering the Decca period Dean expressed regret at the handling of the affair.

Later on, Alan Whitehead, maybe a bit skint and doubtless suitably miffed at his dismissal, sold a story to the Sunday papers about
shennanigans with groupies during his tenure of the drum stool. Apparently, one of the photographs featured himself wearing only a sock and it wasn't on a foot.
Such poses have since become commonplace with similar pics released for publicity purposes by the Red Hot Chilli Peppers and Moby (Dick?).
However, the story only enhanced the band's reputation
and the lyric, "Dance, dance, read your Sunday papers", cheekily appeared on the fade out of 'Radancer'. 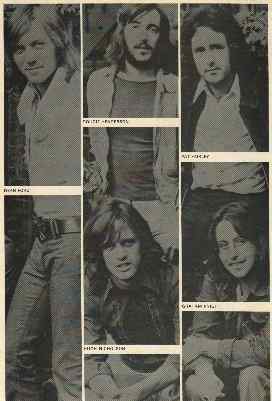 The pic above is the back cover of the 2nd Decca album 'Songs' and shows clockwise from top left: Ford, Henderson, Knight, Fairlie and Nicholson.
With Nicholson in the driving seat a sense of fun returned to the band's sound with hits such as 'Cousin Norman' and 'Radancer' but they also wanted to be taken seriously as an albums band
and the second Decca offering 'Songs' is well worth having for numbers like 'Empty Bottles and 'Bad Weather' alone.
The latter was a Nicholson composition from his days with the Poets.

But Marmalade could not shift LPs and Nicholson left sometime in or after July 1972. In an interview with the NME's Fred Dellar he said that the singles band tag was just too strong to fight.
We don't suppose that a lightweight name like 'Marmalade' helped either in that 'heavy' era.
He eventually formed 'Blue' with his old Poets mate Ian McMillan but see all about that on our Blue webpage. 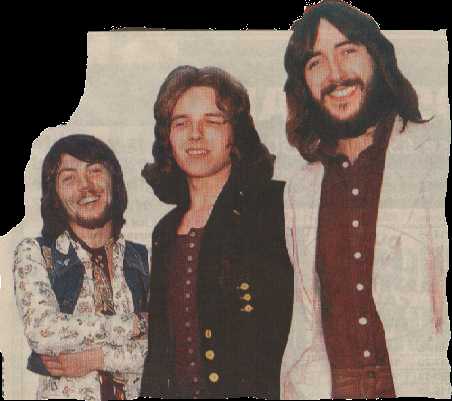 A period of inactivity on the recording front ensued until Mike Japp, was enlisted to replace Nicholson. New singles were issued 1n 1973 but failed to chart.
The NME described the new boogie sound of Marmalade as, "poor mans Status Quo". Knight then left having recorded most of the 'Our House is Rocking' LP' which seems to have been delayed for a year. Marmalade were at one time touring as a three piece until Joe Breen once of the Dream Police came in on bass.

As the hits failed to return, the next thing was there were two versions of Marmalade on the road,
Graham Knight having started up 'Vintage Marmalade' with Alan Whitehead on board too, to knock out the old hits in contrast to the official band with their heavier act.
Eventually in '75 Dean gave up the struggle and went solo leaving Knight with the name and a clear field.

In late '71, Pat Fairley had left to manage the publishing catalogue. He later worked in that line in the USA and then ran a bar in Canoga Park, LA called the Scotland Yard.
We once sent special correspondent, Karolyne, on a mission to check it out.  After a long drive in the 90 degree LA heat our pub-spyette was looking forward to a cool drink
but the doors were firmly shut and windows blanked out.
So we can't couldn't confirm anything we'd heard about the draught Guinness, live bands and collection of memorabilia.
See below for what it looks like/once looked like from the outside. 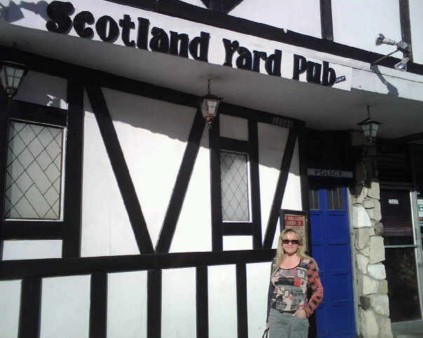 Karolyne  adds a touch of class to Rockingscots as well as the front of Pat's Fairley's LA pub.

By January 1976 the band, consisting of Knight, Whitehead again, and Sandy Newman, once of the well known (in Scotland anyway) Chris McClure Section, were back in the charts with
'Falling Apart at the Seams'. Sandy is at the top right of the1970 pic of Chris's outfit below. We'd endorse the tailor in the ad too.
Also in this version of Marmalade was Charlie Smith ex drummer of Dream Police and the Poets. However, here he was on guitar.
We recall he used to come out from behind his kit in his Dream Police days to do a version of Joni Mitchell's Carrie on acoustic guitar.
He must have preferred drumming to strumming for the following year saw him on a drum stool again in Blue.
Garth Watt-Roy took his place for the Marms LP released on the strength of the 'Seams' hit 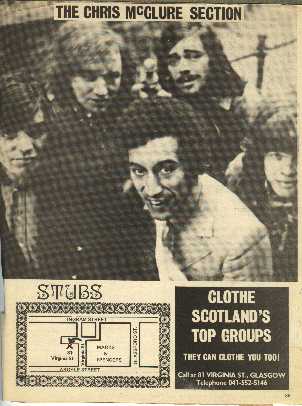 .For 1978's LP '..doing it for you', Knight and Newman were joined by Ian Withington, guitar, and Stu Williamson , drums.
But by 1980, Charlie Smith was back with Alan Holmes (guitar) on the US only album 'Marmalade'.

The line up has varied from time-to-time over the years since then but a Newman led band is still on the go - Knight having retired in 2010.
Alan Whitehead went into nightclub ownership.  Among his ventures was (maybe still is) 'Secrets' in London W6.
Some of his lap dancers graced the front page  of a local newspaper reporting that his licence was being challenged again.
He featured in two, yes two, TV documentaries in 1999 about his clubs. 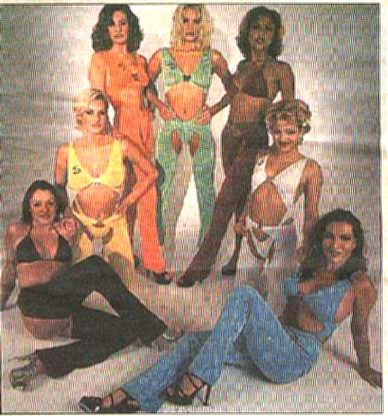 The pic of Junior Campbell below is from the back of his solo album 'Second Time Around'. See the 'LP & CD Reviews' link.
After a couple of decent singles, his solo career went quiet. He wrote a few numbers for the 1980 US only 'Marmalade' LP
and forged a very successful career in music arrangement, composition and recording production.
We were well annoyed when the the NME used a different picture of him every week beside a spoof column from a supposedly thick pundit on life's little ironies.
Jealous ain't never beens! 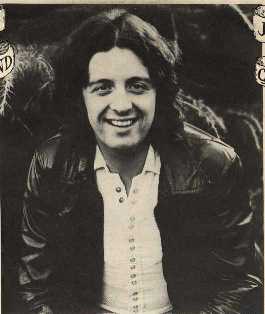 Below:  Dean Ford in 1999 from a Sunday mail article from that year.  Dean's 1975 LP is discussed in the 'LP & CD reviews' link.
In 1976 and 1978 Dean helped out Blue and he is on the Alan Parsons Project's 1978 'Pyramid' LP.
Later he moved to LA and owned a chauffeured limo service there, sometimes doing a bit ofthe driving himself.
We heard from him while he was living in the New York area (he latter went back to LA) and said was still writing and had not given up the notion of a return to the music scene one day.
Sure enough he did indeed resume that career with many new recordings including a new version of  'Reflections'.
These became avaiilable as a 2 CD set,  'A Scottish Heart' a month before his untimely passing in December 2018.

More pics of Dean on the Marms Pics page.

(i) In late 1967 the Marmalade were bottom of the bill on a package tour featuring Jimi Hendrix.
(actually it might have been a different package tour; maybe the Move & Pink Floyd one) - so ignore this as solid evidence.
Anyway, all that we can recall from the one line review in the NME was that Dean sang barefoot!
Well it was good publicity for Sandy Shaw so why not for our boys who would of course try anything to get noticed in those days.

(ii) A small pic on the notes to the 'Definitive Collection' CD shows Junior with Hendrix perm and a droopy moustache.
Im the same pic Dean has bare feet and is wearing a poncho!  Don't know if that has anything to do with anything.

(iii) Hendrix apparently declared that 'I see the Rain' was his favourite record of 1967 - perhaps because it has a 'Hey Joe'-ish riff.

(iv) The band also did a great cover of 'Hey Joe' on their debut album.

(v) Junior plays guitar left handed. and with conventional stringing - just plays everything upside down.  But he was doing this before meeting Hendrix!

We hope you have enjoyed this canter through Marmalade's history. Check out their discography and LP/CD reviews from the links at the top.
Please also, take a look via the links on our main page for Poets/Trash/Cody and Blue and others.

Finally, thanks to Martin Payne of Making Time for linking us to his site. Do check Making Time by clicking on the logo here.