Rockingscots is a website dedicated to Scottish beat groups and rock bands from the '60s and '70s. Go to the Rockingscots homepage for more groups or to e-mail us.

TEAR GAS and the Bo Weavles

We reckon that Tear Gas were the first group based in Scotland to release an LP - rather than one made by Scotsmen based elsewhere.
They were also labelled a Scottish 'supergroup' - a title that was in vogue at the time  - since their members had all been in other leading bands.
The original line up :
Alistair 'Zal' Cleminson - guitar
Wullie Munro - drums
Davie Batchelor - vocals
Chris Glen - bass
Eddie Campbell - organ

Cleminson and Batchelor had been in a band called the the Bo Weavles as guitarist and organist respectively along with Jimmy Brand (drums) and Ricky Archibald (bass). 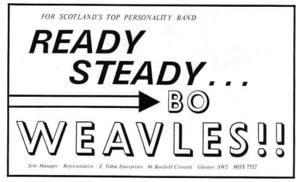 The Bo Weavles vocalist was the guy below - one George Gilmour. 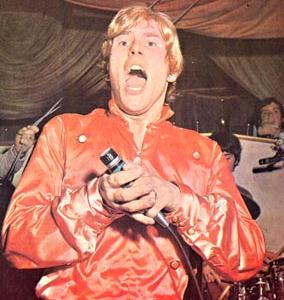 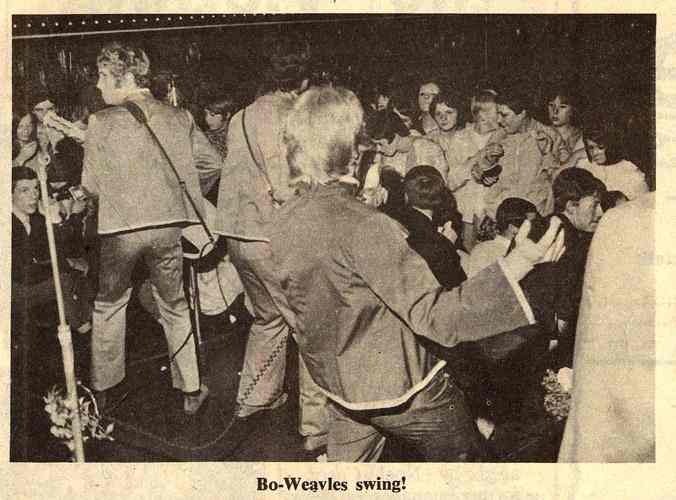 Live pic that has appeared in books before. l-r: Zal Cleminson, Ricky Archibald and George Gilmour.
We are informed that in their later period the band had a van with their name on the sides but was otherwise
tricked out in psychedelic patterns - and that Albert Clink from Pennilee was the driver/roadie.

And here are two fantastic photies of the band when slightly younger (c) 1965. 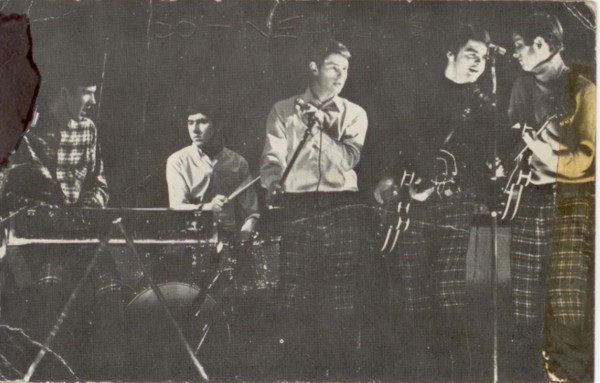 Many thanks to Bill Bryceland for these.  Note that the top one has Bo-Weavels scratched on it - in case like us you can hardly believe this is the same guys as the top two pics but we are assured that they most definitely are.  So, left to right: Davey Batchelor; Jimmy Brand; George Gilmour; Ricky Archibald and Alistair Cleminson respectively.   Note that tartan trews were not just the stage gear of choice for Beatstalkers. 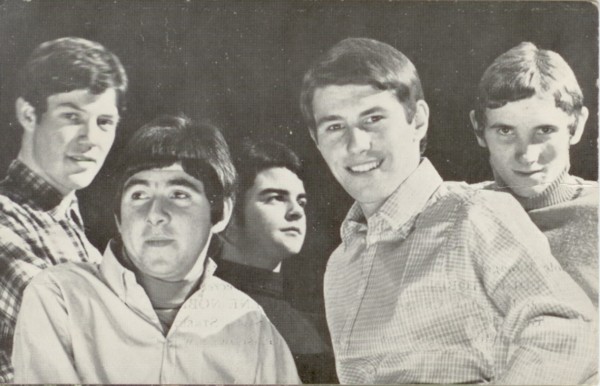 Anyway, whenever, on the departure of George Gilmour to take up theatre work, the band's name was updated to Mustard and the ex-Poet Andy Mulvey took on the vocals..  More personnel shake ups saw Wullie Munro come in from 'Right Tyme', Chris Glenn from 'Jade', Eddie Campbell from the recently defunct Beatstalkers and Davey Batchelor switched to vocals.  To emphasise this fresh start, the name was changed again and so it was that in early 1969 - Tear Gas exploded on the Scottish rock scene.  We know, we know.  Sorry.

By the way - we're told that Zal's nickname arose from his employment in the 'Izal' loo roll factory.

Pic below taken by John Young in the dressing room of the Electric Garden in Sauchiehall St, Glasgow. June 1969.
Sent to us on 01/11/2018. by John Young. Brilliant shot. Thanks John. 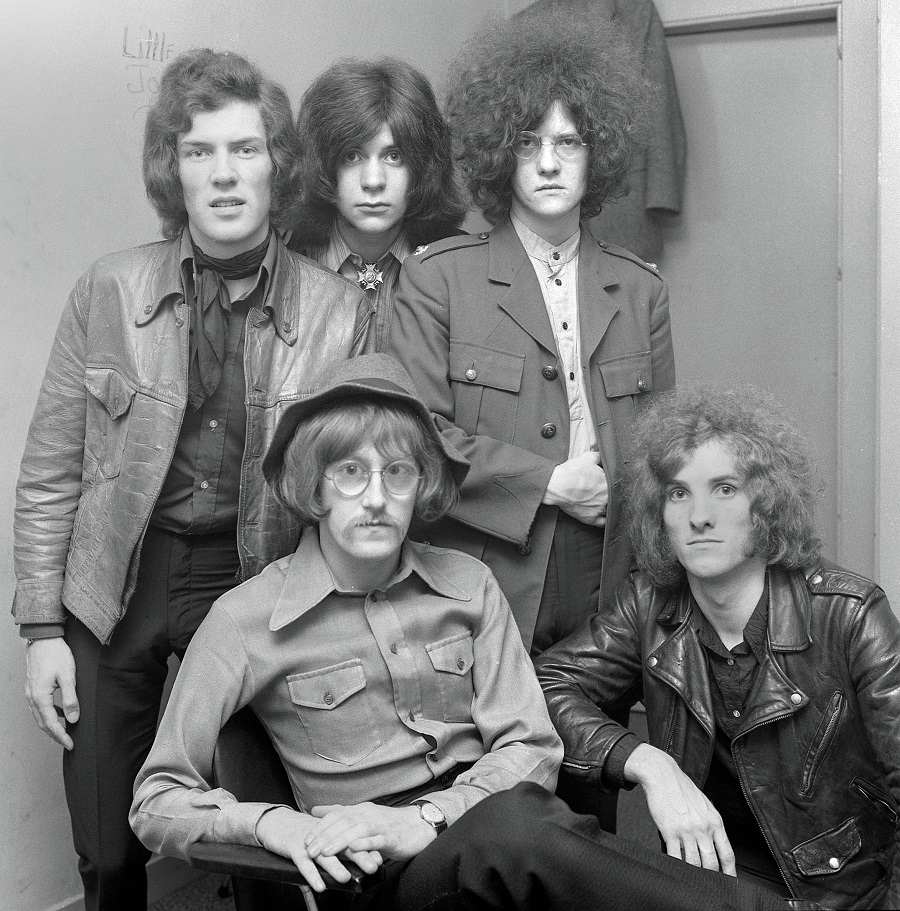 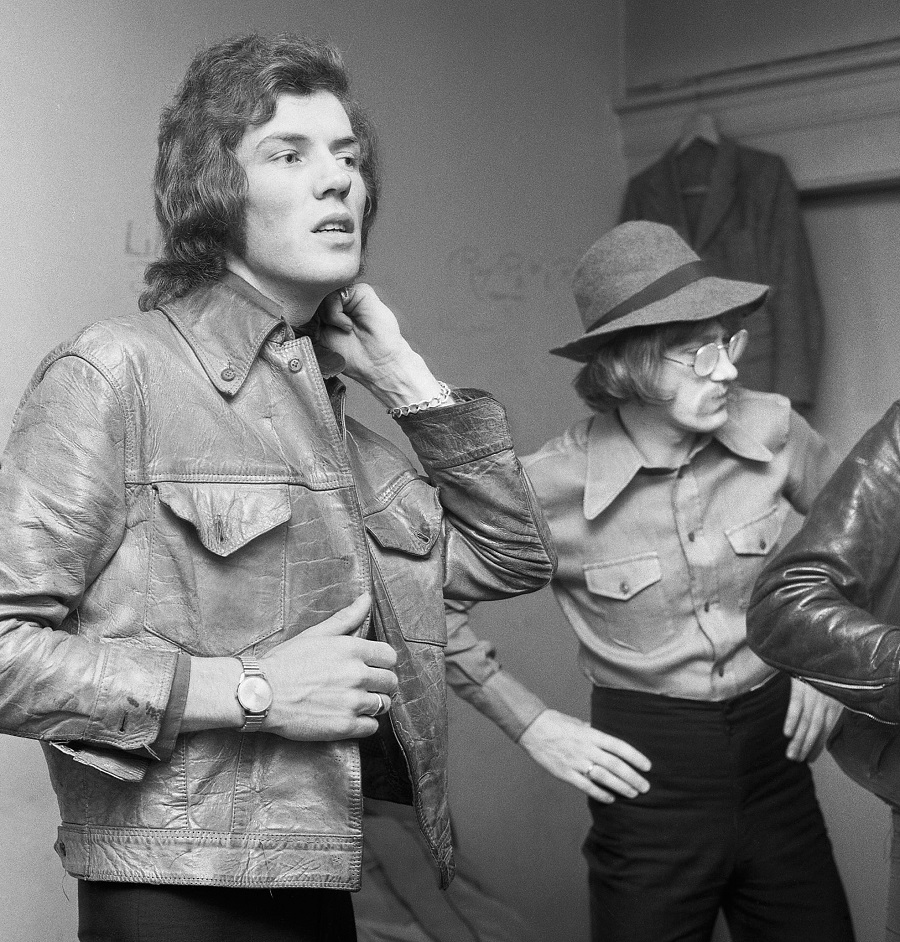 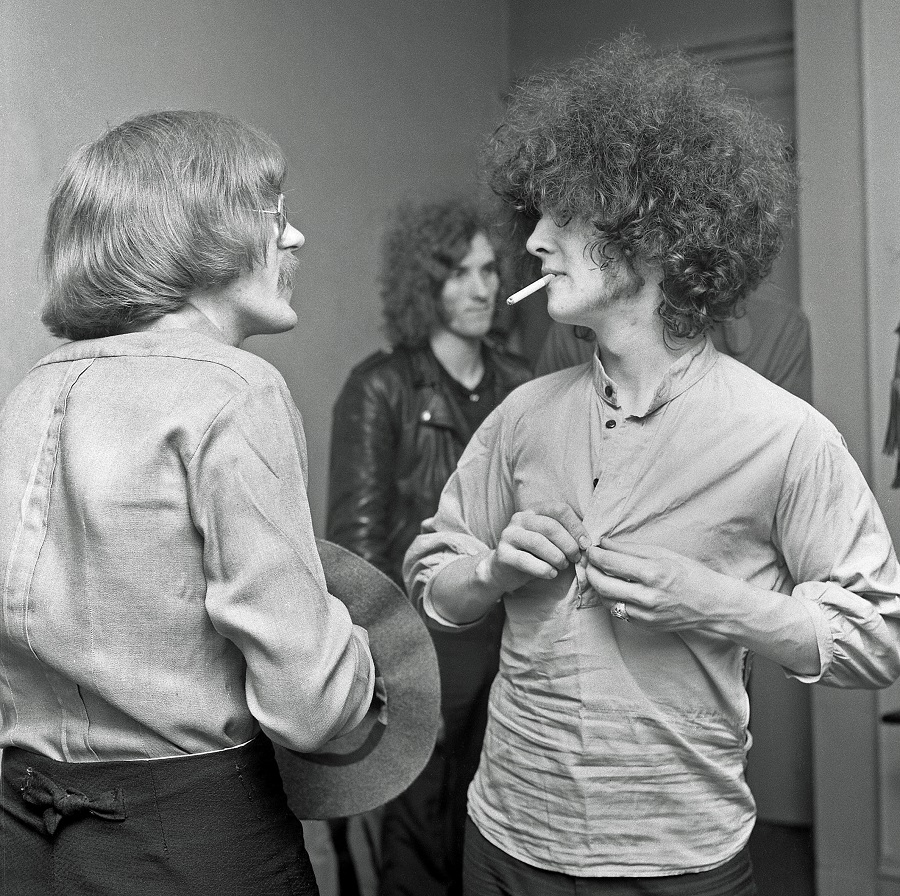 Note the tweed jacket hanging on the rail at the back - It makes a further appearance on Davey, three pics down. Looks good on him. 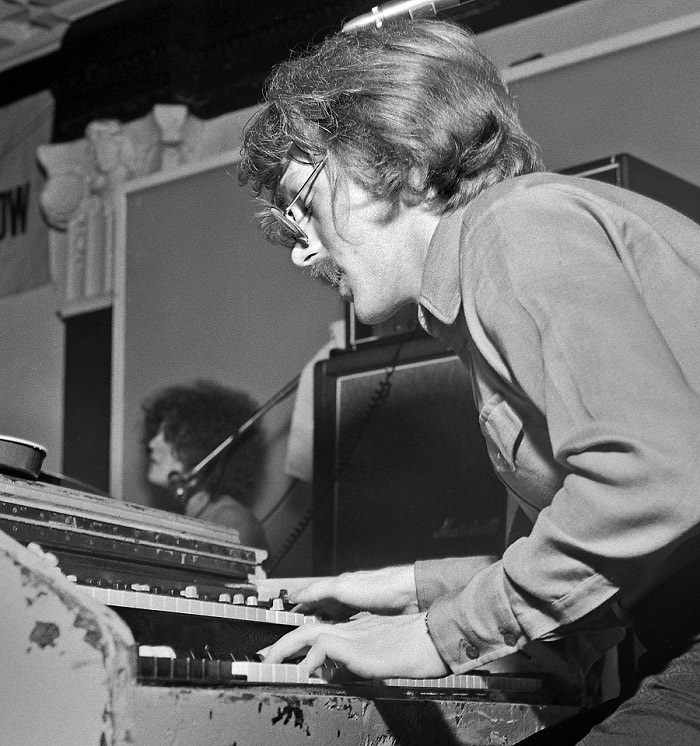 Great live close up of Eddie in action on battered keyboard. Wullie Munro in background - (c) John Young
Nice decorative features of the room on show as well.
Apparently, (thanks Lost Glasgow FB page) the building was originally a Georgian villa
before having a multitude of other incaranations.

Initial stage set was a mixture of covers with a few originals. Their go at Led Zeppelin's 'Communication Breakdown' stands out in the memory.
Recall being impressed with the speed that Zal could replace a broken string during the number - have since of course seen the old 'breaking a string' trick in many a band's stage-act.
The early band also had a change of stage clothes. First set saw them in crimpolene two piece suits - each a different colour.
One of our correspondents felt they looked like cardboard cut-outs. Looked ok to us though.
Second set was played wearing more casual clobber.

As said Tear Gas actually got to make (and release!) an LP - an unheard of event for a group based in Scotland other than the Alexander Brothers and their like.
On the 'Famous G' label. Was there was another group released one at same time on 'Famous G' whose name escapes us?
Yes we're told it was 'Hate' the former House of Lords. See cover and label etc below. 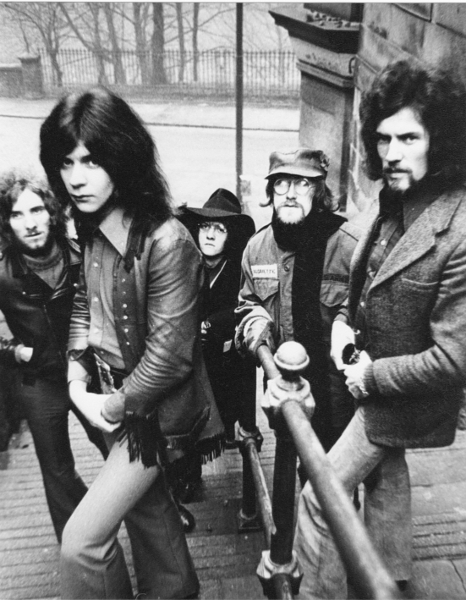 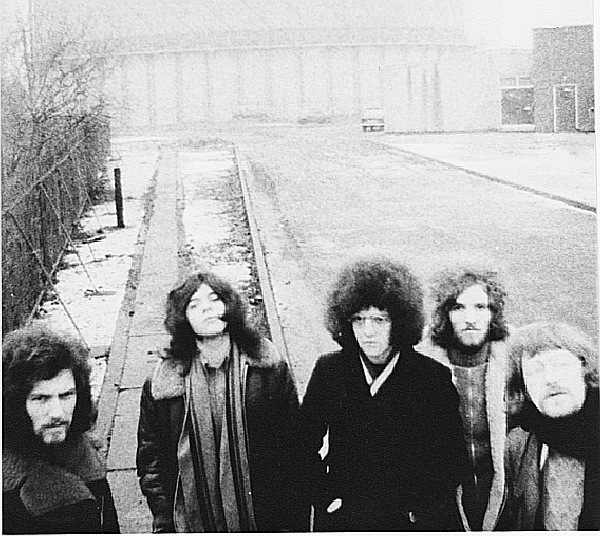 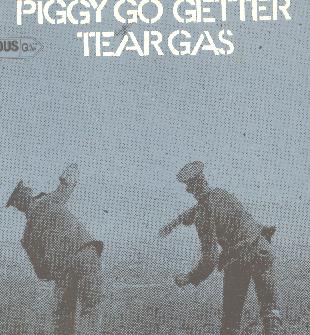 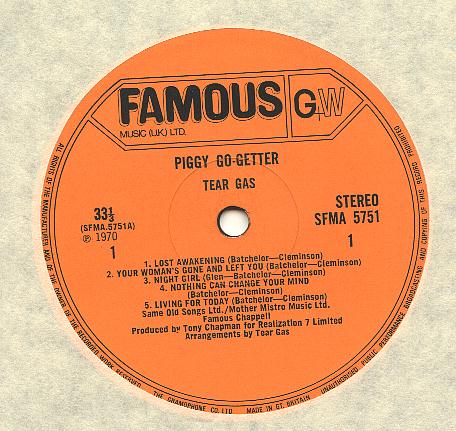 In truth, the best bit about 'Piggy Go Getter' is probably the cover. Its a fairly luxury job -
textured gatefold sleeve with all the words on the back and two long cartoon strips on the inside - Tear Gas' views on the English and the Police.

Not sure whether Wullie Munro or Eddie Campbell was the first to leave. Wullie joined Berserk Crocodiles (see Dream Police) and
Ted McKenna from the freshly collapsed Dream Police replaced him.
Eddie Campbell quit for whatever reason - perhaps just tired of touring - and was not instantly replaced.

A second LP, 'Tear Gas' on the Regal Zonaphone label was released in 1971 by this revised line up.
Campbell does appear on the 'live in the studio' medley of 'All Shook Up & Jailhouse Rock'.
An un-credited Ronnie Leahy apparently provides the keyboards elsewhere on the album.
Mr Leahy played with Glen, McKenna and Cleminson again in the early '90s under the name of the 'Sensational Party Boys' -
promoters mistook the name for a group of male strippers! ' Saw them in London in the Charing Cross Road Marquee (now a Weatherspoons) - a right good night. 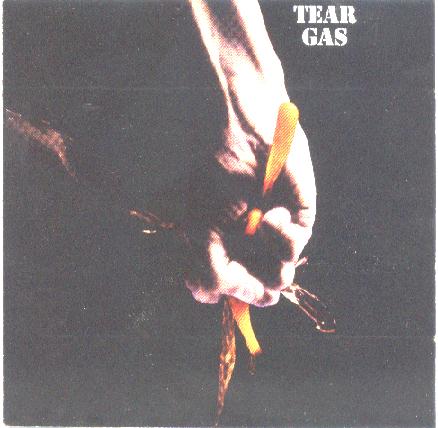 Tear Gas' has an odd front cover pic. Is it meant to signify anything? If so it was lost on us. All tracks are 'hard 'n heavy rock' .
Again respectable if not not terribly memorable apart from 'Love Story', (a chart entry for Jethro till in early 1969) and a highlight of their stage act,
whose arrangement was visited again by SAHB on the 'Penthouse Tapes'.
Heavy versions of  'All Shook Up & Jailhouse Rock' had been delivered by the Jeff Beck Group on Beckola in 1969.
One is left with the feeling that the band was a couple of years behind the times with their material and the union with Alex Harvey was therefore the shot in the arm of originality they needed.
'Tear Gas' was reissued on CD by Renaissance, a US label, in the mid '90s as RCD1005.

After the 'Tear Gas' LP, Ted McKenna's cousin, Hugh McKenna (keyboards and backing vocals) was drafted in from 'Nickelson' but when Davie Batchelor left to go into production.*
Hugh took over the lead vocals and this is the line-up that returned to Glasgow after an unsuccessful stint in London and joined up with Alex Harvey.
The rest of that story is well-documented history.
*He produced the SAHB stuff  - and they all sound pretty good

Mooning
Tear Gas seem to have had a fondness for this pass-time. We'd certainly never seen anyone else do it before - though of course we may have had a sheltered up bringing.
Example one - the Bobby Jones ballroom in Ayr. A fire alarm or phoned in bomb threat had resulted in thousands of dance-goers crowded outside in the main street. Looking up to the first floor dressing rooms the crowd was treated to the sight of several bare arses protruding from the windows. They got banned of course.
Pleasure-ama seem to have banned every decent band at one time or another.
Example two - The Ayrshire band 'Dusty Hut' are coming back from a gig in Carlisle where they'd supported Tear Gas.
Half way up the A74 they are overtaken at dangerously high speed by the Tear Gas van replete with naked bums stuck up against the windows.
Our Miff literally nearly died/got killed laughing! Great band. Great gigs. Cheers lads.

Anything to add anyone?