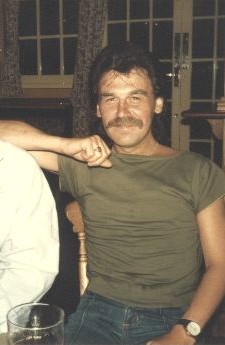 Affectionately knows as 'Blec' or 'Wee Blec', Brian died suddenly at his home in Ayr on Wednesday 14 July 2010 aged 58.
Brian contributed greatly to Rockingscots.co.uk in its early years.  He was a mine of anecdotes about White Trash, Tear Gas, etc -
picked up from his time as a roadie with Ayr band Pure Greed.
Brian also contributed scans of artwork from his record collection such as Tear Gas's rare first lp 'Piggy Go Getter'.
Rockingscots is the richer for his involvement.

Brian's family moved to Armour Drive (Holmston) in Ayr from Newton-on-Ayr in the early 1950s.  He attended Ayr Grammar then Belmont Primary and Secondary schools.
On leaving school he had an office job with Craig's Livestock Auctioneers, then as an apprentice electrician with John Finnies before service with the RAF.
The latter included a spell stationed on Gan in the Indian Ocean. He later worked at SAL at Prestwick and had short spells in London and Barrow-in-Furness.
But it was to Ayrshire that he always returned and there he maintained an association with rock music as stage electrician for local music promoter Tom Jones.
In that capacity he worked with the crews of all the famous musicians playing at 'The Pavilion' (The Piv.) at Ayr.
From the '90s to the mid 2000s Brian lived in Troon until progressive lower limb disability required a move to a more accessible residence back in Ayr.
Though increasingly housebound, Brian kept up a regular exchange of news and views with friends by telephone right up to his very last day.

The younger of twin boys by 20 minutes, his family's strong Baptist faith meant that Brian had a possibly less outgoing childhood than some of the neighbouring children
yet he nevertheless managed to make several lifelong friendships in those years.
Once into his teens however, Brian blossommed socially.  He was one of Ayr's original mini-mods, frequenting coffee bars such as the Moderne and the Carlton in Ayr and
taking part in scooter runs to the likes of Tog's Cafe in Troon.  He also went to the Craigie College dances, the Bobby Jones and became a roadie s mentioned.
Around this time he acquired the 'Blec' sobriquet of which he was immensely proud.
He said he had never heard of anyone else with that nickname, the origin of which was an un-PC comment about his ability to take good tan in the summer - see photo above.

As 'Blec', Brian was known to almost everyone locally of his generation.  He made friends easily wherever he went.
A walk around Ayr with Brian would involve an endless stream of ladies and men calling out a greeting - even from across the street.
It was the same further afield; at a Who gig in Hyde Park, London in 1996 those in the standing area that were under six feet tall were finding it hard to see the band
until Brian came back from a visit to the loos - with a milk crate.  He became an instant hero to a queue of total strangers wanting a go on it to snap some photos of the band.
Turns out, one of the catering contractors at the gig was from Ayr and of course knew Brian and helped him out.

The great loves of Brian's life besides his family and the ladies - he was briefly married once and had several reasonably lengthy relationships - were reading, writing, rock music
and playing golf; he loved Seafield, Belleisle and the Troon golf courses.
He followed the results of Celtic and QPR and, probably most of all, he enjoyed, frequenting hostelries in the company of friends.
Brian was an avid reader of the Scotsman, poetry and quality fiction.  When he was not reading he was writing and from the '90s he attended creative writing classes as long as his health allowed
- his high point was seeing one of his works published in a collection of Scottish contemporary poetry.

He was daft on the Small Faces, the Kinks, Pink Floyd and most of all the Who.  Indeed, working alongside the Who at Auchinleck Community Centre in 1969 was one of his fondest memories.
One of the fondest of mine will be our 50 year friendship reinforced by many a pint and a blether about anything and everything from Rabbie Burns to Ray Davies.   RIP Brian. All or Nothing!