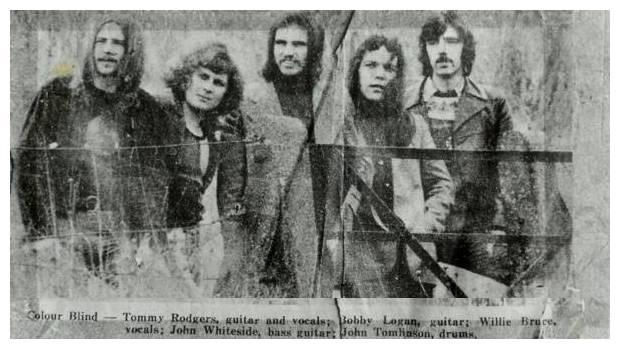 All info from Bobby Logan.
The original Colour Blind was a three piece formed in 1968-69 and fronted by Willie Simpson on lead vocals and bass with John Tomlinson- drums and Bobby Logan - guitar - the latter two having been in the Steve Tomas Band - a seven piece soul band.  The pic above shows the second incarnation of Colour Blind  from around 1970-71 (see below) - with Willie (Wullie) Bruce - vocals,  Tommy Rogers - guitar and vocals, John (Jock) Whiteside on bass from the Breeze plus originals Logan and Tomlinson.  They played mainly on the Glasgow circuit as warm up band for acts like Chris McClure, Salvation and Slade in their early days. Roadies were Allan Newlands, Ronnie Lawrence and Tom Kitchen.  Manager Jim Ruddie.

Note the symbolism that the photographer has captured in the pic above.  Both sides of their musical offering are represented - the hard rock depicted by the metal and stone contrasted against the harmonies and US west-coast influence illustrated by the rustic setting. It can also be seen as, 'a young band, having struggled through the thorny fields of learning their craft, now stand at the gates of artistic success, gazing hopefully into the pastures new ahead but still held back by the concrete and steel wires of indifference that guard the entrance to the land of artistic recognition'.   Ok, ok; its just an old photo - but a right good one.  The 'Fair Isle' pattern crew neck jersey worn by John Tomlinson captures one of the better fashions of the period.

Here's a rare thing - a sort of press release. 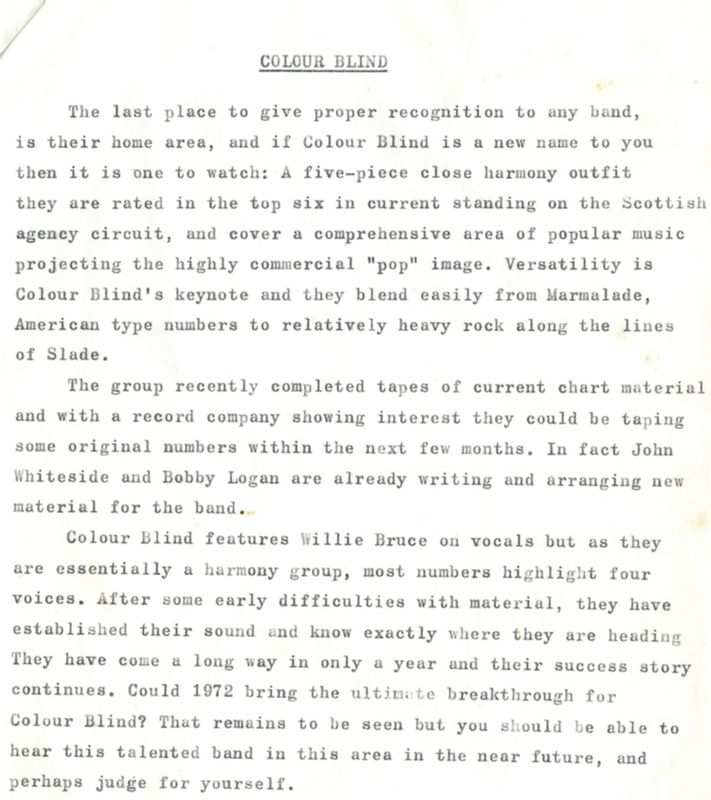 We're not sure where the unappreciative punters were from that it's addressed to - but they should consider themselves told off.  Kilmarnock we hope.
Cheers.