Sounds like a dated name now (though there was an English bunch using it again in 2003!) and it was by the late '60s
but this was one of the most popular groups in the West of Scotland in the middle of that decade.
They seem to have played Ayr Ice Rink on time and again - we can remember the posters but were just too young to go!
The edit below from a 1965 agency advert shows the Hi-Fis as just one of many Scottish second division groups
but those around at the time certainly have fond memories of them - the name just kept coming up again and again on e-mails to Rockingscots.
So by popular request here is some info on them. 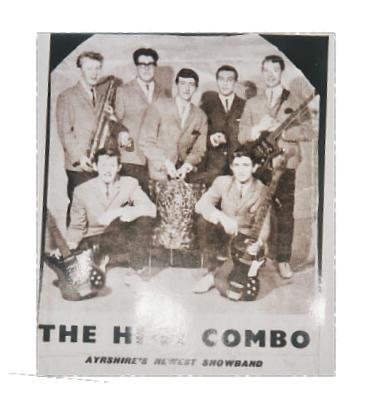 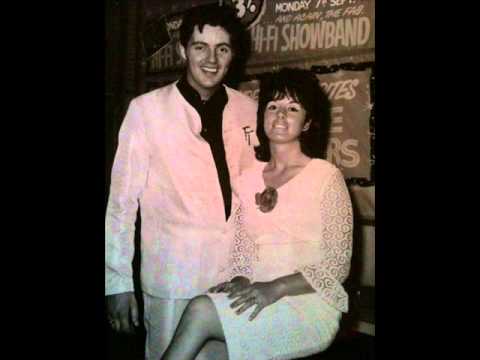 Note the poster above the heads of Rock & Roll and Country Legend Tommy Trousdale and wife Marjorie
taken in the entrance to the Bobby Jones Ballroom in Ayr. Pic posted by W.Kerr on Remembering Auld Ayr FB page 2018.
A close inspection shows it reads:
'Monday 7th Sept. - And Again The Fab -  Hi-Fi Showband.'   No mention of 'Combo'.in this one. Just saving space!
When was this?  Well, 7th Sept fell on a Monday in 1964 which ties in well with the rest of the dates here.
Dancing on a Monday night?  Well after a Sunday when nearly everything in Scotland apart from the church was closed, we'd all be ready for a dance.

The showband formation  gave way in December 1965 to a soul influenced five piece Hi Fis line up of: Kenny Munro - lead guitar; Eddie Johnson - keyboards;
Dick Sneddon - drums; Andy Sneddon - bass; Tommy Gray - vocals.
That version of the band is responsible for the band's only single, the fantastic: ' It's Gonna Be Morning / I Wanna Hear You Say Yeah' on the Alp label. 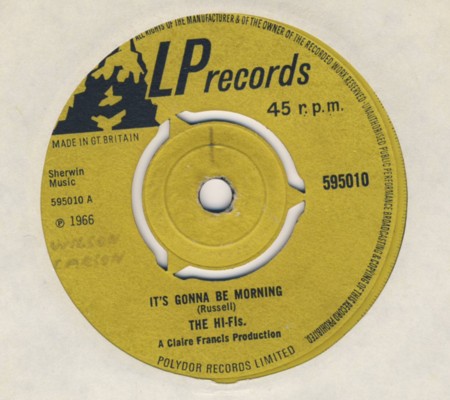 Thanks to Lenny Helsing as always for this pic from his singles collection.
Note it's credited to 'THE HIFIS'.
Wonder who Wilson Carson was?  What hard times he must have fallen on to part with this gem.
Writing your name on records tells a social tale in itself.  You took your records to parties at the risk of some git nicking them.
Putting your name on them - like marking your New'rday bottle - might just deter theft or help identify them later.

The single has a great, if simple production - vocals and drums well up front, guitars and organ behind providing the melody.
The A-side is a medium paced soul number but on the second verse the singer gets stuck in
and produces one of the best, possibly 'the' best, impassioned vocal performances from a sixties Scottish band committed to record.
Tommy Gray's recorded legacy to us might only be these two sides but he can still be well chuffed.
The b-side is a more beaty affair - a very tolerable 'Whatcha gonna do about it' type riff - itself a steal so no harm done.
Some fuzz guitar melody lines towards the end add interest. 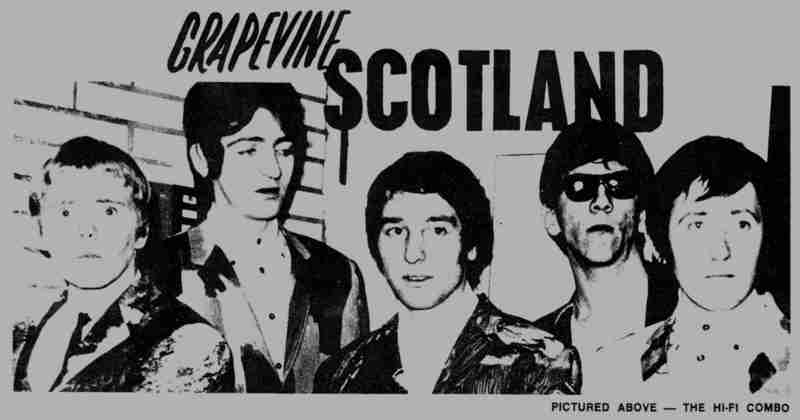 Of the 65-68 era of the band Tommy Gray says, "We were always the token Scottish band at Radio Scotland`s (The Pirate Station) Clan Balls, which featured many current top groups:- Rolling Stones, Kinks, Hollies, Tremeloes, Wayne Fontana and the Mind Benders, Cat Stevens to name but a few. We played all over Britain, but in Scotland one of the highlights of our career was playing a residency at the famous "Glasgow Barrowland". Our local venue was "The Walker Hall" Kilbirnie, Ayrshire in the early sixties we played to full houses Fridays and Saturdays...Oh those were the days!!!! We also played at the "Picasso Club " Buchanan Street around 1965 the site it was on now is part of a shopping centre. This was where all the Scottish Bands of the time met up on a Saturday night after their gigs. Bands such as "Beatstalkers" "Pathfinders" "Studio Six" "The Stoics" "Dean Ford and the Gaylords" (Marmalade) etc. Previous to that we played at "The Two Red Shoes" in Elgin where the previous week a band from Liverpool called "The Beatles" appeared almost unannounced. In fact we stayed at the same digs the week after they had. Six months later they were world famous"!! A '67 pic of the boys is below.

By the later '60s the Combo members were: Kenny Munro - guitar and vocals; Davy Jack - bass and vocals; Franky Much - drums; Jimmy Townsend - vocals. Tony DeMarco recalls the music being by then basically  rocky-folky-r&b'y covers.  They did great versions of Tim Rose' Morning Dew, Always Something There To Remind Me, Bang Bang etc. Best stage performance was a Horror Show where a coffin was carried on stage containing manager Danny Finnie , who then 'rose from the dead' and chased around after the band and crowd . Mental!!! Jim Strachan remembers them playing in Stranraer in 1967 & '68 - at the "Kinema and in the open air at the "Old Pier". Jim reckons their versions of Morning Dew and Hush were outstanding and that the band .were in a different league to the Poets or Beatstalkers. High praise indeed. 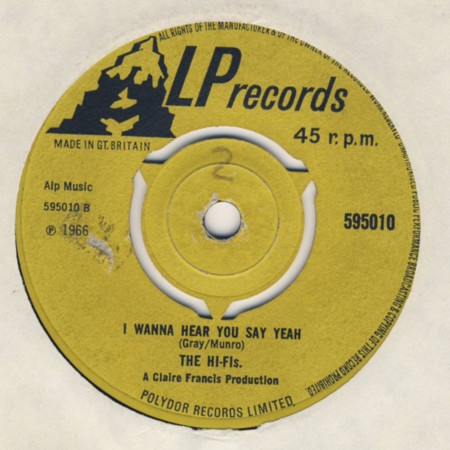 Thanks again to Lenny H for the b-side snap.

In the latter days of the band they were down to a three piece, the singer, Mr Townsend, having departed. Lennox Munro, Kenny's ex-wife remembers that they went through many vocalists, and seemed to be auditioning endlessly, but no one was just right. She remembers chasing all over Glasgow one night with Frankie, Davie and Kenny in pursuit of Frankie Miller who had agreed to sing with them but was nowhere to be found. Frankie was the only singer they would even have considered chasing down! She feels the band was at its best ever when they gave up looking for a vocalist and Davy Jack took over the singing as, "he had a really great voice too". 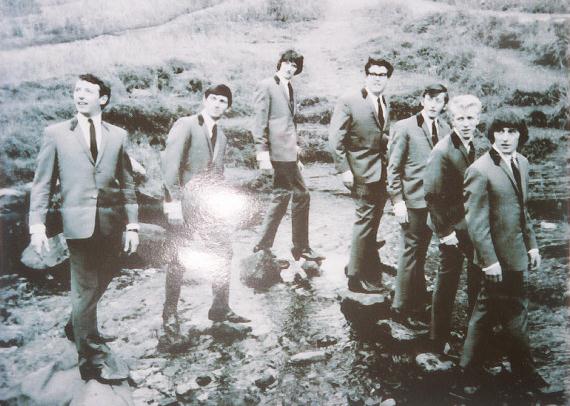 In the late '60s the band also tried changing their name several times - one being "Mangas Colorado" - but none lasted very long. They finally broke up perhaps as late as '71 under one of those short lived 'other names'. Davy Jack , who was apparently the "talent" in the band , a great song writer and musician joined East Of Eden (1970). Franky Much took up van driving and manager Danny Finnie moved to Australia in the mid 70's. Andy Sneddon now plays bass with a tribute band called "Rockin on Heavens Door" they appear all over Britain and are often playing at the Barrfields now known as "The Vikingar" in Largs and also the Magnum Centre in Irvine. Eddie Johnson works in the nursing profession. Eric Brown is living in London involved in computors. After the split around 1968 Tommy Gray took off and did some cabaret solo singing and travelled to Istanbul of all places. After that he left the Pop scene and did various jobs such as driving instructor and driving London buses. He also worked in a shipping office until eventually settling in Lochwinnoch where he is now retired. Dick Sneddon is now living in Edinburgh and is involved in art. We presume he was the Dick Sneddon who was in the 70s band Bodkin. There is a good site on them:  http://republika.pl/pearlsofrock/bodkin.html  but in Polish.

Kenny Munro is worthy of his own paragraph.. The man who put the 'sing' in Singapore according to '242 Beat' magazine in 1966 - he had spent much of his childhood in Singapore and he and his brother were on the Singapore Olympic Swimming Team. He also held a Scottish Olympic medal for swimming. He married Lennox in 1970 at an all-night "happening" at the Close Theatre in the Gorbals, which created a something of a furor at the time. When the band broke up he worked as a bus conductor for about 3 months or so while he was attending college before he became a swimming coach. In 1977 he emigrated to Canada, divorced in 1978 and returned to Scotland thereafter. A once brilliant guitarist and songwriter he succumbed to the inevitable 'personal problems'. He died in 1992, still holding his guitar. 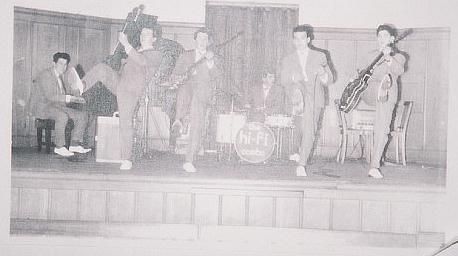 Now a reminiscence from a fan from original fan Anne Bryden (Arrandale):
Well, all I can say is HI-FI-COMBO......I loved them.  I used to go to Ayr Ice rink on a Wednesday night to stand on the ice & watch them. I couldn't skate,......I was there for the Hi Fi Combo....no that's not right, I was there for Dick Sneddon!  Oh, how I fancied him with his sideboards that nearly met under his chin.  And when they played Summertime Blues.............  He threw me a drumstick once and I had it on my wall right up till I got married!

One time, me and my pal got an advance from our weekend job and plunked the school to go off on the bus to 28 Lindsay Avenue, Kilbirnie - we'd looked up their address in the phone book!   We got there and stood outside the place trying to catch a glimpse of Dick or  maybe his brother Andy.  It was freezing.   Eventually, a wee wummin comes oot the hoose to the bakers van and asks if she could help us. 'Naw,' says we. We're just waiting for Dick & Andy.'  'Oh,' says she, 'They're at their work. They're painters for the cooncil!' ' C'mon in lassies for a cuppa tea an a bun.'
'Eh?' thinks us......Rock starts don't go to work!'  I see that Dick is maybe living in Edinburgh. When's the next bus?'  XXX

Many thanks to Tommy and Liz Gray - the great pics etc, Lennox Munro, Tony DeMarco, Anna Broadbent, Jim Strachan and Anne Bryden for their input. Special thanks to Lenny Helsing, music journalist and musician (check out the Thanes CD 'Downbeat and Folked up' on Screaming Apple Records) for a pic and the Grapevine Scotland article on the band from Radio Scotland's '242 Beat' magazine and also for a listen to the band's single.