We have very few examples of what must have been quite common back in the day- business cards advertising bands.
Love the logo - 'Sock it to me Sounds'.  Very contemporary.
Many thanks to Tom Paton for providing this rare example plus all info here.

Tom recalls - I met Jim Conway when we were apprentices in ICI Ardeer and we soon discovered we shared a love of music.
Jim was desperate to get a band together and so we formed INFINITY in 1968. At the start I played with a borrowed electric guitar and speaker cabinet.
I signed a hire purchase agreement to buy a Marshall 50 watt amplifier from Hay's Music Shop in Saltcoats - it was my pride and joy.
That same Hay family would produce a singer songwriter across the other side of the world - Colin Hay of Australia's "Men at Work" and latterly a solo artist.

INFINITY predominately worked in and around North Ayrshire. Dancing to live bands was the trend everywhere in those days as Disco was a name yet to come.
Opening number was always "Time is Tight by Booker T and the MG's".
Soul music was in so there would be typically "Get Ready" (Temptations) and others of that genre plus anything we could manage from the charts.

I suppose we hit our heights with the gig at the Grand Hall - see clipping below.  It took some serious blagging to get that one.
Our status was obvious as we arrived in the old van with "Thompson's Televisions" on the side. No double wheelbase Transit for us just yet...
Sitting in the changing room getting ready to go on we could hear the Poets next door doing Fleetwood Mac's "Oh Well" with practice drum mats and amps turned way down.
I still recall feeling way out our depth to be playing at such a large venue with top acts, but so excited to be there.

Advert in the Kilmarnock Standard for an event on Saturday 1st November 1969. 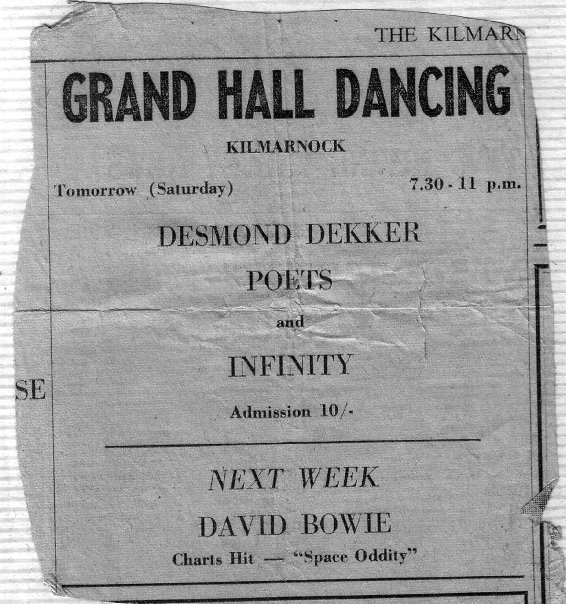 An interesting cutting about the Grand Hall, Kilmarnock thankfully preserved by Tom Paton.
Desmond Dekker also played Dalmellington Community Centre  - very possibly the Friday night before.
10 shillings (50p) entry in 1969 - equivalent to around £12 in 2015.
Bowie, who was on the next week, had been in the charts with 'Space Oddity' a few months earlier.
He used Juniors Eyes as his backing band - Tim Renwick (guitar); Mick Wayne (guitar); John Lodge (bass) & John Cambridge (drums)
See: http://www.bowiewonderworld.com/tours/tour58.htm
According to one attendee at the gig Bowie made a statement about the mellotron not working and therefore either not being able to do that song at all
or having to perform it without the mellotron parts - probably the latter since he was known to even play it acoustically.
However, maybe they just did not have a mellotron - he certainly didn't have Rick Wakeman along to play one.