The STOICS and JADE

Much of our info on this late sixties Glasgow band that produced one of Britain's greatest blues-rock vocalists comes from Tony Demarco who went to school with some of them
and who has a fair old pedigree himself - former front man/wailer for The Regent V, Illusion, Palomino, session bass-player, DJ in Picasso, Sgt.Peppers,
Electric Garden, and touring DJ to the Stoics and Beggars Opera and fellow Burns Howf bar propper-upper with Francis "Albert" Miller!
Many thanks also to Gordon McFall for updating membership and guitar info, Alan Dewar for set list info and Duncan Kennedy for the great pic below.
Mean looking geezers or what! Note the top that FM is wearing in the pic above of the classic line up -
was it later borrowed from his laundry bag and made famous by Alex Harvey? 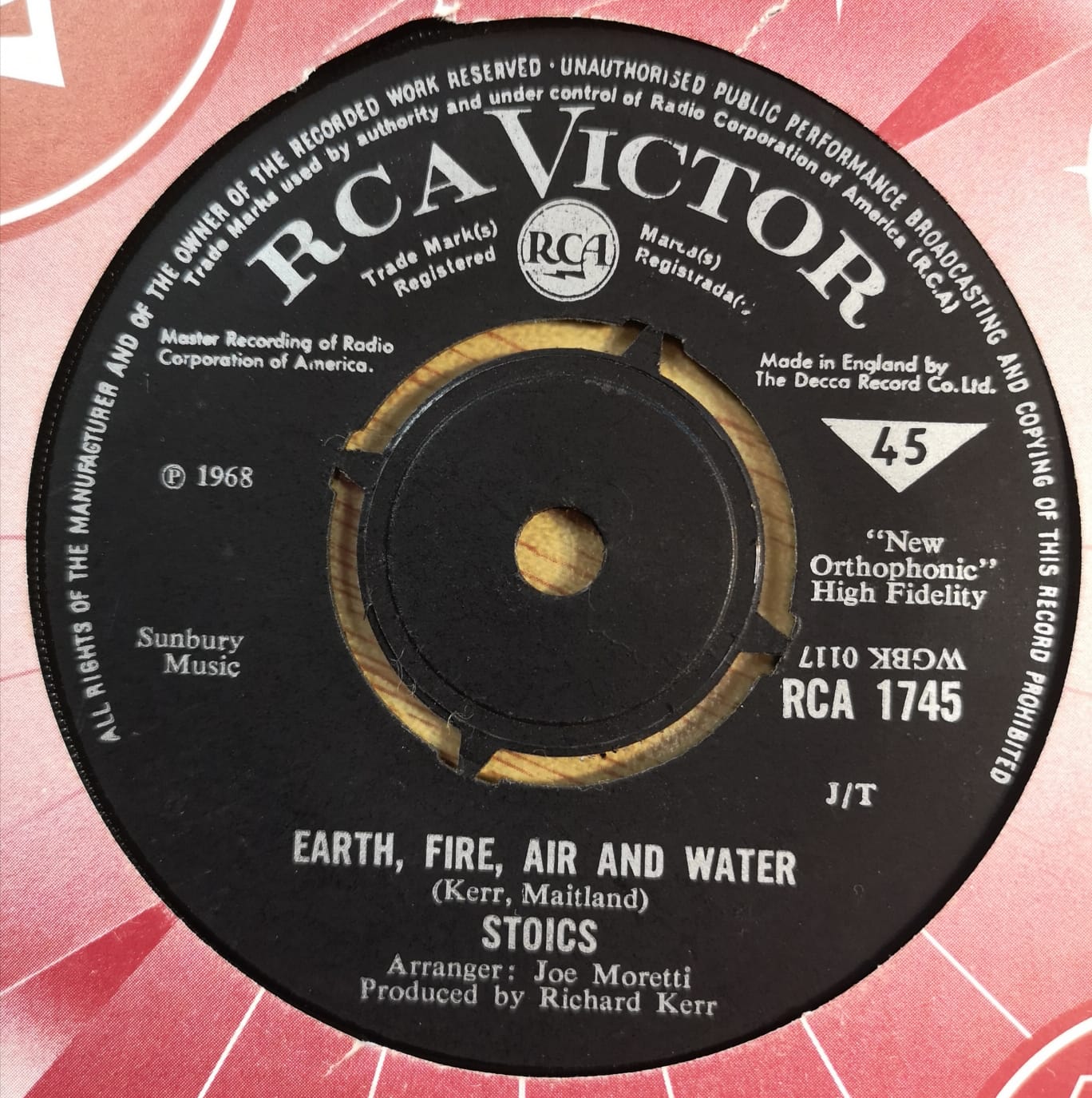 The group secured a record deal with RCA in late 68 and the single: Earth, Fire. Air and Water c/w Song of the Sea came out in early 1969.
It didn't set the charts on fire but Doris' b-side showed songwriting promise.
Note the Arranger - Joe Moretti - the Glaswegian guitarist who played the lead guitar on
'Shakin' All Over' and so many, many more great numbers.  Wow!
record pics from Kevin Head 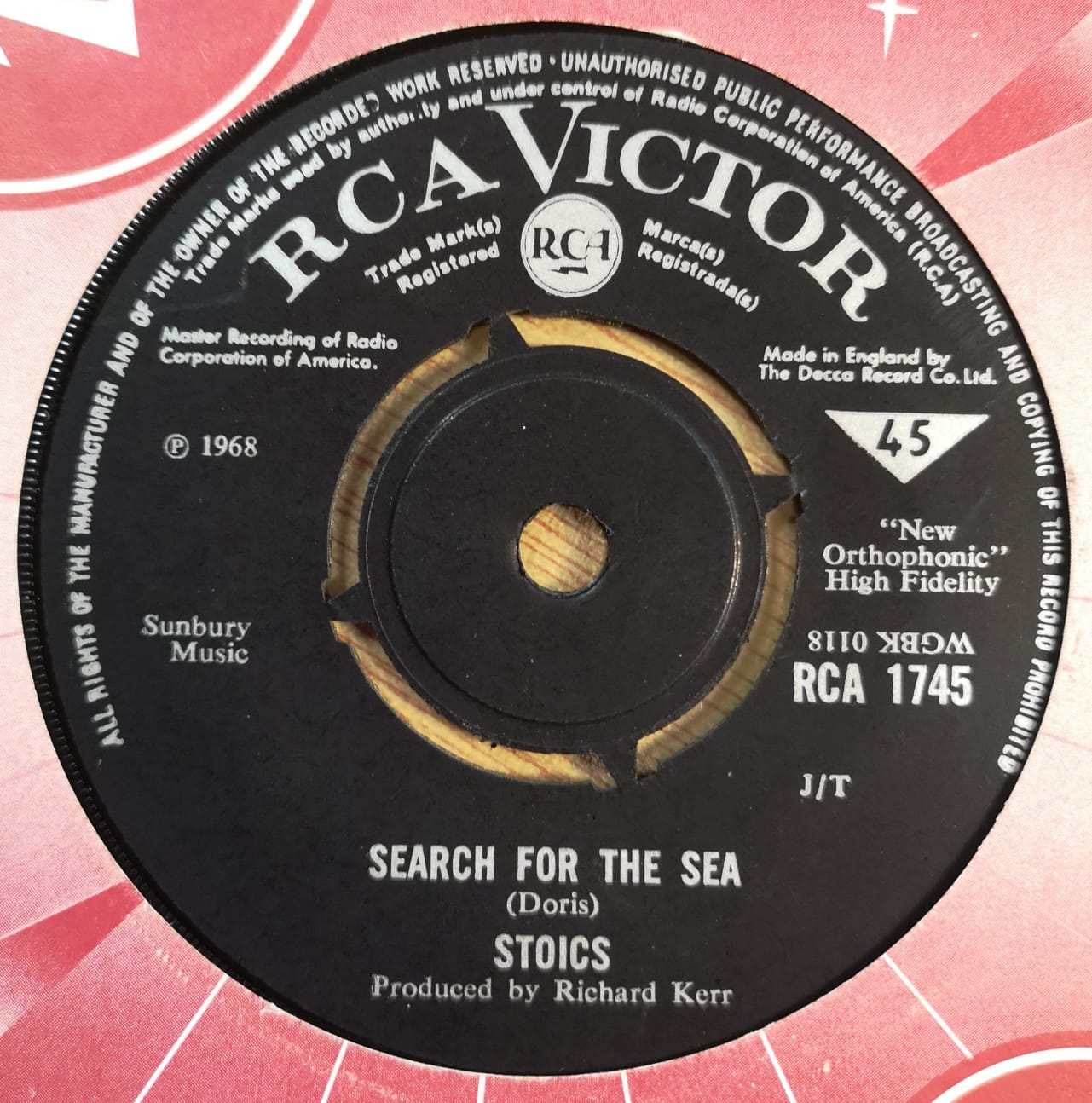 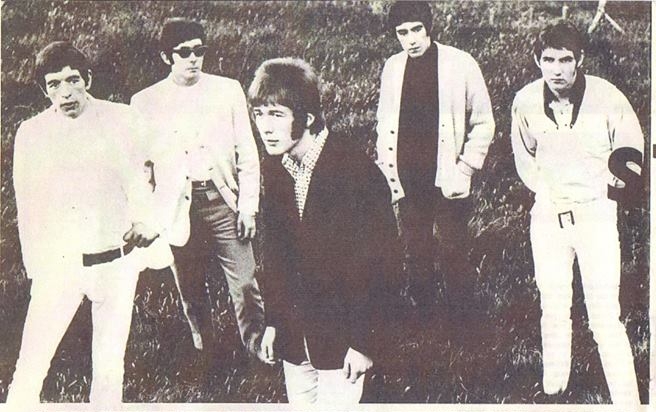 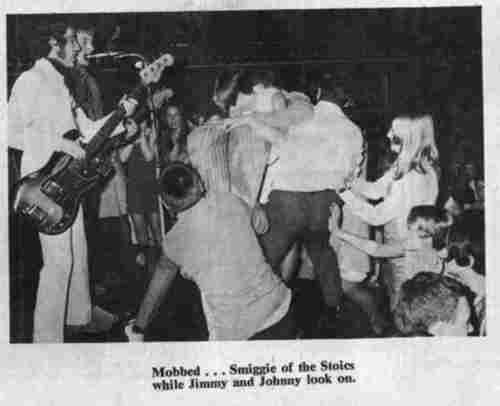 Smiggie eh?  More inaccuracy from Showbeat magazine. Pics above and below from Jim McA. 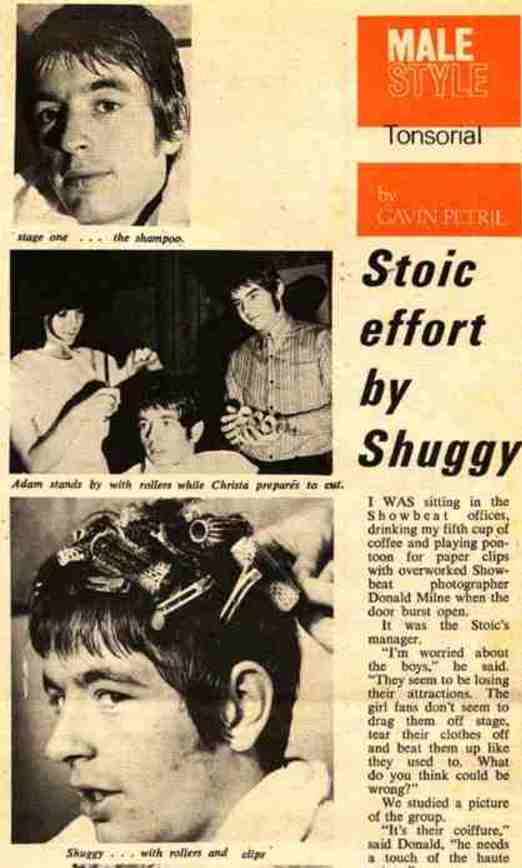 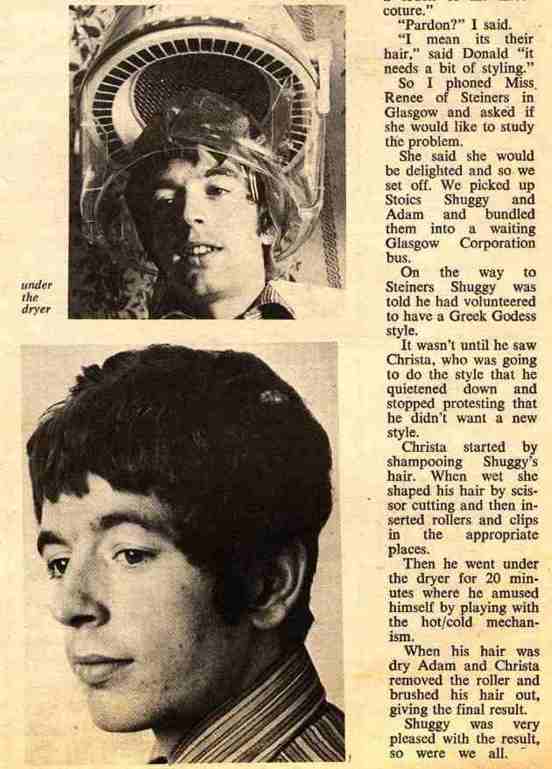 
We recall The Stoics playing Ayr Ice Rink in early 1969 second on the bill to the Move and with 'Jade' as support. An important talking point on the night among

a couple of admiring teenage guitarists was whether Jimmy Doris was playing a real Gibson Les Paul or a copy - you couldn't get quite close enough to tell.
Well in 2016 Gordon McFall tells us that it was a Les Paul Junior. Cleared up at last then Tom McCleary! Next gig we recall is when the Stoics played the Bobby Jones in Ayr later that year.
A blistering cover of Jeff Beck's 'Let Me Love You Baby' from the 'Truth' LP complete with note perfect solo (or so it seemed) was followed by them getting chucked off and banned.
Miller explained over the mike that the management (Joe) had told them to play 'Pops' but they didn't know any 'Pops' so that was them finished for the night.
Clearly recall girls at the gig moaning that you couldn't dance to their stuff. We didn't care about that. Just very disappointed not to hear more of that guitar and those vocals.
Contributer Alan Dewar who followed the band all over Fife and the Lothians remembers great versions of 'The Stumble', 'Time of the Season', 'Hold On', 'Looking for a Fox' and 'Evil Woman'.

Doubtless in response to several such reactions to their sets the band changed their name to 'Howl' and hit the university gig scene in England
where heavier music that 'ye cannae dance tae' was more acceptable. Remember seeing such a statement in 'Transplant - ' Scotland's Teenage Magazine'.
Success did not follow however and in the early '70s Howl broke up. Frankie Miller went on to his well documented fame and then unfortunately just as well documented very ill health.
Jimmy Doris also had his moment of glory writing 'Oh Me Oh My' for Lulu then A&R work before tragedy struck him too.
Psychological problems may have contributed to him being fatally struck by a London bus in the late '80s/early '90s.
Of the others, Hugh McKenna worked until late 70s with a Cumbernauld band "Silverbird".
Jack Casey kept on playing and John Wynne went to London to roadie for Roy Harper. Anyone got anything to add??

The Stoics did record some demo tracks for Chrysalis.  Will we ever get to hear them? 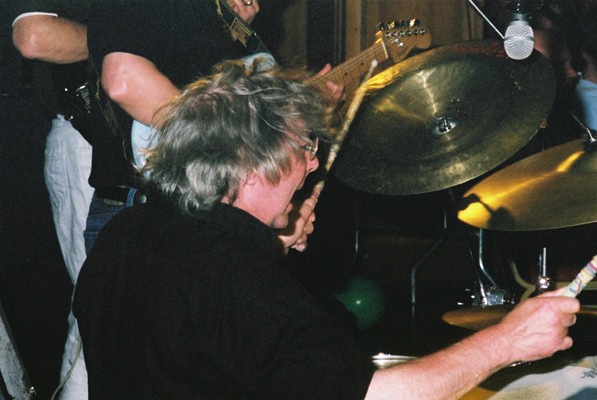 Jack at his 60th birthday bash

R.S.  How did you come to join the band?   J.C. Jimmy Doris, Adam, John Wynn, Shuggie McKenna and I all lived in Penilee and  decided to form a band.

R.S.  Who was Adam and what did he play?   J.C. Adam was the keyboard player.

R.S.  How did the Stoics sign for RCA?  J.C. They won a competition at a Battle of the Bands in Glasgow, at the Picasso.

R.S.  Where was the Earth, Fire etc single recorded?  Were there anymore RCA recordings?  J.C. It was recorded in London. No other RCA recordings.

R.S. Why was Shuggy replaced by Frankie Miller?   J.C.  I think because Shuggy had a young family and was reluctant to tour.  He stayed in Glasgow and managed Jimmy Murray's band. Frankie Miller fancied a good band and joined.

R.S.  Were any original numbers played by the Stoics?   J.C. Yes, one called 'Bababalama Bababalee'.

R.S.  Why the name change to Howl? J   J.C. It was time for a change, we changed it for the Isle of Wight Festival.

R.S.  Was it the same members in Howl or did anyone leave the band?   J.C.  Same members.

R.S.  Why did Howl break up?   J.C. The lead guitarist and lead singer were going different directions.

R.S.  Did the Stoics and/or Howl record for Chysalis as said?   J.C. Yes, Frankie Miller probably has them.  Lots of tapes, nothing on vinyl.

R.S.  Who wrote them?  J.C.  Mostly written by Jimmy Doris and Frankie, I came up with some lyrics.

R.S.  What did you do after Howl?   J.C. I returned to Glasgow for the birth of my son Dean, and later daughter Verity.  I've played casually around Glasgow, Scotland and Ireland doing gigs and session work with various bands and line ups ever since. 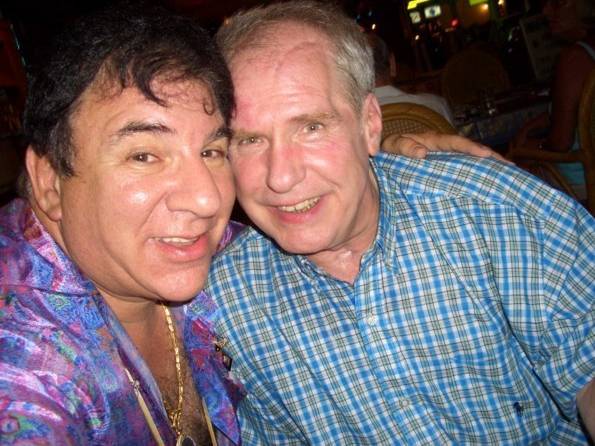 We did see this band support the Move and Stoics at Ayr ice rink in early 1969 but can't really recall that much about them.  However, others certainly can so here's some info mainly provided by Willie McClymont their ex-manager.

Latter line up was - Jim Diamond was on vocals, Jimmy Murray on drums, Pat Gaffney on bass, Jim Lacey on guitar (white Fender Stratocaster, (then redone in black by Willie himself). Gaffney had replaced Chris Glenn who went off to Tear Gas.  The band used to use Sergeant Pepper's for rehearsing during the week and played there some Saturday nights too.

Their set consisted of heavy rock versions of soul songs like R Dean Taylor's "Gotta See Jane" and "Private Number" by William Bell along with   The Lemon pipers "Green Tambourine" and heavy stuff like Elmer Gantry's "Flames" and Fleur de Lys "Liar". They moved to and played the clubs and colleges as support to mainly blues bands.  The gig at Ayr Ice Rink mentioned above was the Scottish end of a tour by The Move. Other dates were and the Sunday night was The Locarno in Sauchiehall Street. An excellent night.

What happened after and where are they now:  Jimmy Murray still thought to live in Glasgow.   Pat Gaffney last heard of living in or . Jim Lacey joined "The House of Lords," who in 1969/ 70 were a big attraction even in England . They made an album for Famous Music under the name of "Hate" which was actually more than decent. Jim Lacey played for "O'Hara's Playboys," a big name showband of the day. He then joined an English band called "The Alan Bown" with the late Robert Palmer on vocals.  He then joined "The Andy Fraser Band" after the said Mr Fraser had left "Free". Indeed a talented guitarist but with the unfortunate knack of joining established bands a few months before they split up.

Jim Diamond  - who passed in 2015 - was only 15 when singing with Jade, went on to Gully Foyle before joining Alexis Korner.  Then he made an album with Carmine Appice of Vanilla Fudge, sang with Bandit and  had a #3 with "I Won't Let You Down" fronting PhD.  Most famously he had a number one under his own name in 1985 with "I should have known better".   Jim latterly became half of The Blue Shoes.   Its a small world right enough - we remember Jim and his manager trying to have a quiet drink in lounge bar of the Crabtree in Fulham one Saturday night at the height of his success.  Word soon went around as to who he was and the poor bloke had to leave to get away from pestering autograph hunters.  It's not the pub it was Jim - by the way!